In the days leading up to the $20 million Saudi Cup (G1) at King Abdulaziz Racetrack in Riyadh, Saudi Arabia on Feb. 26, usracing.com is publishing profiles of the starters in the world’s richest horse race. Profiles will be updated with odds, post positions and jockeys several days before the race 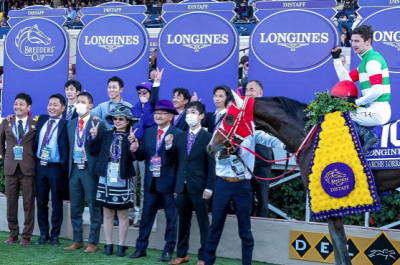 Japan’s leading trainer Yoshito Yahagi is not one to shy away from a challenge. This time, he’ll send out his star mare Marche Lorraine against the boys in the $20 million Saudi Cup (G1) on Saturday.

In what could have been her career grand finale, Marche Lorraine pulled off a huge upset in winning the Breeders’ Cup Distaff (G1) at Del Mar at odds of 49-1. She defeated champions that included Letruska, Malathaat, and Shedaresthedevil.

Her odds won’t be as long on Saturday, but the competition will be a little more intense, if that’s possible. Yahagi said he began thinking Saudi Cup the minute Marche Lorraine held off Dunbar Road by a nose in the BC Distaff on Nov. 6. This will be her final race.

“First of all, I want her to complete the race safely, as she will be a mother soon,’’ Yahagi said late last month. “While I understand the competition is very tough, I hope she performs well enough, like at the Breeders’ Cup.”

After the trip from Japan to Riyadh, Yahagi said his 7-year-old mare “lost a bit of weight after the long travel, and I understand that she is still conditioning now and needs some more time to recover (she will be back on the track again on Wednesday, Feb. 23).

Betting advice: Maybe the BC Distaff should have been her final start because it doesn’t seem Marche Lorraine can make it two monster wins in a row … She surged to the lead in the Distaff and led by two lengths before hanging on by a nose to win at 1 1/8 miles … Don’t think she can finish in the top 3 in this company.

Notes: Yahagi, a three-time top trainer in Japan, saddled the first Japan-based winner in a Breeders’ Cup when Loves Only You won the BC Filly & Mare Turf (G1) three races before Marche Lorraine’s win … He didn’t expect a second win: “It was kind of a surprise – even for me – to watch Marche Lorraine win the Distaff to be frankly honest,’’ he said … Marche Lorraine was 0-for-3 in graded stakes races heading into the BC Distaff.