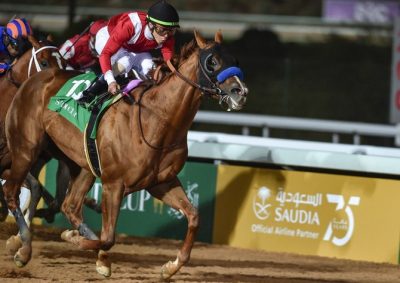 Mitab Almulawah has entered two horses in the Saudi Cup, Making Miracles and Emblem Road. Both are owned by Prince Saud Bin Salman Abdulaziz, who employs Almulawah as his personal trainer. Together they are 4-for-22 this season with four third-place finishes.

The Prince’s runners are the top-rated horses based in Saudi Arabia, with Making Miracles considered slightly superior to Emblem Road.

Alexis Moreno, a 27-year-old Panamanian, has been riding both of them, and he considers them live longshots. The American-bred Emblem Road has six wins in eight career starts, and Moreno thinks the distance of the Saudi Cup may suit him better.

“Making Miracles has run three times this year and he’s improved a lot,” Moreno said. “I think the distance is a little short for him, but he’s a nice horse and he can do it.

“For Emblem Road, I think (1 1/8 miles) will be better for him than a mile. I think both horses have a nice chance, and I think they’re going to surprise in the Saudi Cup.”

His dam, Venturini, a daughter of 2006 Preakness winner Bernardini, didn’t make her sire proud. She did nothing on the racetrack, going 0-for-2 and earning $388 for trainer Bill Mott.

Betting advice: Like his stablemate Making Miracles, Emblem Road is listed at 40-1 in BUSR’s  odds. Both horses are in the race because Prince Saud Bin Salman Abdulaziz is one of his nation’s most prominent owners, with five Group 1 wins in his career. But there’s no way I can recommend a wager on either of them.

Notes: Prince Saud Bin Salman Abdulaziz has won with 73 of 440 starters in the past five years. He’s been on a roll the past year, posting a 23.4% with 34 victories … Emblem Road is one of many Riyadh-based horses whose name begins with Emblem. Among them are Emblem Time, Emblem Girl, Emblem Eagle and Emblem Star.