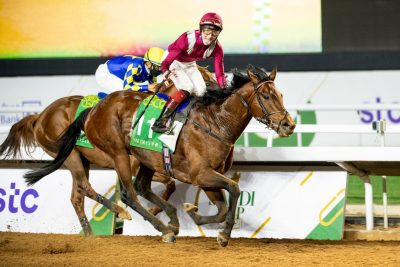 If Mishriff repeats as Saudi Cup champion, the $10 million winner’s share will make him racing’s all-time earnings leader. If he finishes second, the $3.5 million payoff will put him about $237,000 short of Australian super mare Winx’s record of $18,904,364.

It would be a mistake to doubt whether all-time great John Gosden can have Mishriff at his best off a layoff of 4 1/2 months. The 70-year-old Englishman has won more than 3,000 races, including the Epsom Derby, Arc de Triomphe and Breeders’ Cup Classic.

Gosden decided to skip the Breeders’ Cup Turf last year after Mishriff ran fourth at Ascot in October. “He’s been a busy boy,” he said a week after the subpar performance. “He needed a little bit of a rest.”

It sounds as if it was a smart move.

“Mishriff has done well over the winter,” Gosden said last month. “He’s a 5-year-old and as you would expect, he’s thickened out even more.”

Ted Voute, racing manager for owner Prince Faisal, also is confident the horse will be his old self. “He’s got an amazing constitution,” Voute said. “John said to me he’s even stronger.”

Betting advice: If you had Mishriff last year, when he paid $41.60, congratulations. That won’t happen again because he’s the early favorite at 27-10 (about 5-2) on BUSR. Certainly, has a good chance to repeat, but he might be an underlay. Decide whether his odds are an accurate reflection of his chances to win.

Notes: Gosden has won more than 600 races in the United States. He was based in Southern California in 1984 when he won the first running of the Breeders’ Cup Mile with the filly Royal Heroine at Hollywood Park … He and his 26-year-old son, Thady, share a trainer’s license. Thady supervised the preparation of Mishriff for last year’s Saudi Cup … Thady is a third-generation horseman. John’s father, John “Towser” Gosden (1904-1967), was a successful trainer who won the King George VI and Queen Elizabeth Stakes, one of England’s most prestigious races.