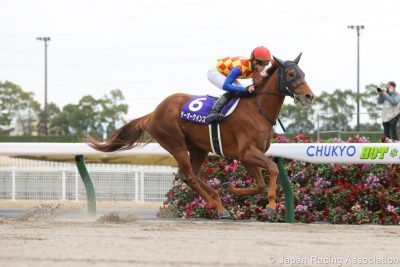 In a race featuring Japan’s last two dirt champion, it was T O Keynes over Chuwa Wizard by six lengths in the Champions Cup at Chukyo Racecourse on Dec. 5.

The victory earned the 5-year-old son of Sinister Minister an automatic berth into the $20 million Saudi Cup – at 1 1/8 miles on the dirt.

Marche Lorraine, winner of the Breeders’ Cup Turf (G1), may be the more familiar Japan entry in Saturday’s Saudi Cup, but T O Keynes looks like a horse that should not be ignored.

After two historic wins at the Breeders’ Cup (Loves Only You won the BC Filly & Mare Turf), Japan hopes to do the same on Saudi Cup day.

The Champions Cup win was the first Grade 1 win of T O Keynes’ career, but he has been a consistent winner As a 2-year-old, he had a win and two thirds, then won three races in seven starts a year later. His 2021 campaign opened with three victories, including the Antares Stakes (G3) at 1 1/8 miles and the Teio Sho (about 1 ¼ miles). He ran fourth in the JBC Classic on Nov. 3 before his big win a month later.

In the Champions Cup, T O Keynes came through with a winning stretch run from the outside and sped away from the pack for the impressive victory over Chuwa Wizard, who finished second in the 2021 Dubai World Cup (G1) earlier in 2021.

After the race, his jockey Kohei Matsuyama, said: “I was able to ride him in good rhythm and he responded remarkably well turning the fourth corner, so everything was perfect. I think he’s a very strong horse and I’m glad I was able to bring out his strong performance.”

Betting advice: Even though this is a huge leap, if he gets room to run in the stretch, he could be a dangerous longshot. Based on his career record, he thrives on wet tracks, so it’ll be interesting to see how he fares in Saudi Arabia against the likes of Mishriff and Mandaloun. I like his chances to earn some decent dough better than Marche Lorraine’s.

Running style: Off the pace

Notes: Champions Cup was trainer Daisuke Takayanagi’s first Grade 1 Japan win and third overall in graded stakes … T O Keynes was bred in Japan by Yanagawa Bokujo … Despite a lack of top-level experience and a fourth-place finish in his previous start, some late money on T O Keynes made hm the favorite in the Champions Cup.