In the days leading up to the 38th Breeders’ Cup at Del Mar in California, usracing.com is publishing profiles on the horses in the $2 million Breeders’ Cup Distaff (Saturday, Nov. 6). The profiles will be updated following the post-position draw on Monday, Nov. 1 (5:30 p.m. ET) 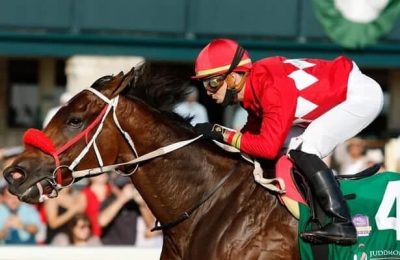 In 1999 I was there at Longchamp, along with thousands of passionate Japanese fans, when their hero El Condor Pasa finished a close second in the Prix de l’Arc de Triomphe. That performance signaled a rise for Japanese racing and breeding that has continued ever since. You may recall Japan-based Lani, a deep closer who finished third in the 2016 Belmont Stakes after running ninth in the Kentucky Derby and fifth in the Preakness.

Japan still hasn’t won an Arc, but its superstar Orfevre did run second in 2012 and 2013. Orfevre happens to be the sire of Distaff longshot Marche Lorraine, but his 5-year-old daughter’s resume doesn’t come close to measuring up to daddy’s. Marche Lorraine never has won a graded stakes, and the Distaff will be her first try for a Grade 1 trophy. It seems most unlikely that her 11,000-mile round trip will be profitable.

Her trainer, however, has excelled in races far from home. The gregarious Yoshito Yahagi trains Loves Only You, a Grade 1 winner in Japan and Hong Kong and a contender for the Breeders’ Cup Filly & Mare Turf. She finished a close third to multiple Grade 1 champion Mishriff this past March in the Dubai Sheema Classic. Last year, Yahagi swept Japan’s Triple Crown with the colt Contrail, who was second Oct. 31 in the Grade 1 Tenno Sho. Two years ago, Yahagi took the Cox Plate, one of Australia’s most prestigious races, with Lys Gracieux. Yahagi, nattily dressed in a fedora with a pink band, enjoyed a wild celebration after watching his mare’s wide rally from far back.

If you think it’s time for Japan’s first Breeders’ Cup victory, a longshot play on turf standout Loves Only You would make more sense than one on stable companion Marche Lorraine.

Betting advice: She’s 0-for-3 lifetime in graded stakes in Japan, where she hasn’t faced standouts such as Letruska, Shedaresthedevil and Malathaat. No chance.

Notes: Marche Lorraine hasn’t run since winning a 1 1/4-mile ungraded stakes on Aug. 12 at Mombetsu Racecourse in Japan. Some positives: She’s 3-for-3 on fast tracks and 2-for-3 with a second at the Distaff’s 1 1/8-mile distance … What’s in a name? “La Marche Lorraine,” written in 1892, is a patriotic song that is part of the repertoire of France’s military bands … Marche Lorraine breezed 5 furlongs in 1:05.60, the slowest of 15 works at the distance, on Oct. 29 at Del Mar.