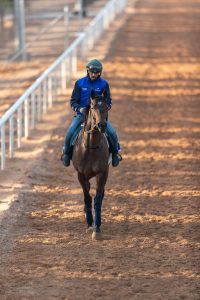 In his dirt debut, Magny Cours finished a respectable third in the 2021 Dubai World Cup (G1) and earned a nifty $1.2 million.

Since then, the bay son of Medaglia d’Oro has run seven times back on turf with a pair of graded stakes wins in France, where he contests most of his races for trainer Andre Fabre.

Fabre believes Magny Cours is ready for his 7-year-old debut — and a return to dirt — in the $20 million Saudi Cup. In his final race of 2021, he finished a close third in the Bahrain International Trophy (G3) back in October.

While not a star on the turf, Magny Cours has finished in the top 3 in 14 of his 16 career starts (7-5-2). Bred in Kentucky and racing mostly in France, he drew post 7 and could be a factor even though going against the toughest field he’ll ever face.

“It’s a perfect draw in the middle of the horses,’’ Richard Lambert, Fabre’s assistant in Riyadh, said. “He might have a little bit less speed than some of the horses around him – the two Americans and the Japanese horse – but it’s better to be there than on the outside.”

Betting advice: Hard to see Magny Cours finishing ahead of Mishriff, Mandaloun or Midnight Bourbon, but Fabre is considered one of the best in the world and has pretty good timing as to when his horses are ready for a big race. Don’t think this is it, though.

Notes: One off-the-wall fact regarding Fabre – he was the trainer of 1993 Breeders’ Cup Classic (G1) winner Arcangues, who went off at 133-1 and returned $269.20 for a $2 win bet … Magny Cours is a commune in the Nièvre department, an area in central France named after the River Nievre. It is home to a motor racing circuit that used to host the French Grand Prix … Dam Indy Five Hundred, won the 2003 Garden City Handicap (G1) at Belmont Park … She was purchased by Godolphin’s then chief executive, John Ferguson, for $3 million in foal to Kingmambo.