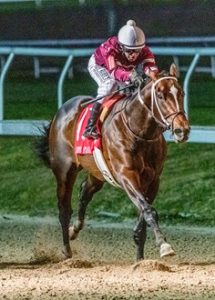 Could it come in Saturday’s $20 million Saudi Cup, against defending champion Mishriff and a talented field from around the world? Well, he’s finished second six times and third four times to go with two victories in 16 career starts, so he’d sure have to raise his game one more notch.

“He has an elite level of talent without finishing it off at this stage,’’ Asmussen said. “He’s not had the success his ability would allow, but it also leaves a lot for us moving forward. It just needs to come together, and I’m hoping beyond hope and expecting that he’s waiting for the Saudi Cup to put it all together perfectly.”

Asmussen believes Midnight Bourbon is set for winning campaign in 2022.

“He came out of it in better shape than he went into it,’’ Rosario said. “It was very good exercise.”

Betting advice: Seems to prefer finishing second and his betting use should be limited to the back-end of exactas, or in the second of third slots in trifectas.