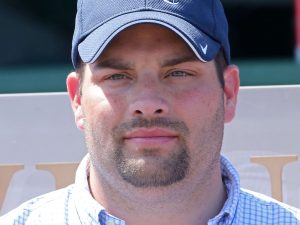 Brad Cox, fresh from his four-victory Breeders’ Cup weekend earlier this month, looks to deepen his bench of promising juveniles on the “Stars of Tomorrow II” program on Saturday at Churchill Downs.

Cox is already in the early driver’s seat for next season’s 3-year-old campaign thanks to Essential Quality, the rallying winner of the Breeders’ Cup Juvenile (G1) at Keeneland on Nov. 6. That victory clinched the division title, and stamped the colt as the long-range favorite for the Kentucky Derby (G1).

Essential Quality is 10-1 in the first of Churchill’s Kentucky Derby Future Pools that runs Thursday through Sunday.

It can be a long, hard journey fraught with injury, illness and disappointing efforts. It always helps to have reserves.

Cox, rapidly ascending the ladder to the top-tier of trainers, sends out a pair of runners in both of Churchill’s $200,000 Grade 2 stakes for 2-year-olds on Saturday: the Kentucky Jockey Club and the Golden Rod for fillies.

While Essential Quality rests up for the challenges ahead, Cox sends out Swill and Inspector Frost, both stepping up to stakes company for the first time following maiden victories.

Florent Geroux was aboard when both colts won and will stick with Swill. John Velazquez picks up the mount on Inspector Frost.

Keepmeinmind, Sittin On Go and King Fury look to regroup after chasing Essential Quality in the Juvenile.

It’s difficult to assess the depth and talent level of the Juvenile field. Essential Quality deserves full marks for the victory but he was the only leading contender to perform up to expectations. Jackie’s Warrior, the 9-10 favorite, ran fourth while Reinvestment Risk was a distant 10th.

Behind Essential Quality, Hot Rod Charlie, the longest price in the race at 94-1, got second while Keepmeinmind was third at 30-1.

Keepmeinmind, 20-1 in the Derby Future Pool, will garner strong support in this spot. He has never run a bad race, including the Breeders’ Futurity (G1) at Keeneland.

The downside: he hasn’t won a race yet in three attempts. The maiden showed dramatically improving speed figures every time out.

Sittin On Go, 30-1 in the Futures Pool, was a no-factor ninth at 9-1 in the Juvenile, his first defeat in three races.

If you want to take a flyer on King Fury, the Futures Pool offers a hefty 50-1.

You can also wager on any filly winning the Derby at 50-1. As usual at this early stage, the “all other 3-year-old colts and geldings” option beyond the 22 on the Futures list is favored at 6-5.

Shifting gears to the fillies in the Golden Rod, Cox sends out a pair of Kentucky Oaks (G1) hopefuls in Coach, undefeated in three starts, and Travel Column, third behind Simply Ravishing in the Alcibiades (G1).

Simply Ravishing went on to run fourth in the Breeders’ Cup Juvenile Fillies (G1). She is the only returnee from that race, and it will be tough to deny her a fourth win in five starts against this lineup.