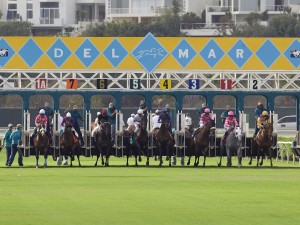 Closing weekend at Del Mar will be packed with stakes races from start to finish, beginning with the $100,000 Red Carpet Stakes (G3) on Thanksgiving Day (Nov. 26).

The seventh running of the 1 3/8-mile race on the grass drew a field of 10 fillies and mares, including a pair from East Coast-based trainers, Chad Brown’s Orglandes (the 5-2 favorite) and Graham Motion’s Blame Debbie (the 3-1 second choice).

The top local contenders include Never Be Enough, California Kook and Going to Vegas.

The first race at Del Mar on Thursday goes off at 11 a.m. PT, the Red Carpet post time listed at 1:30 p.m. as the sixth race. Among past winners of the race formerly known as the Beverly Hills Handicap when it was run at Hollywood Park, were Swingtime (twice), Track Robbery, Royal Heroine, Estrapade, Flawlessly (twice), Windsharp, Astra (twice) and Megahertz.

The field, from the rail out, with jockey, trainer, odds: