Hollywood Turf Cup: Can Oscar Dominguez Pull Off a Repeat? 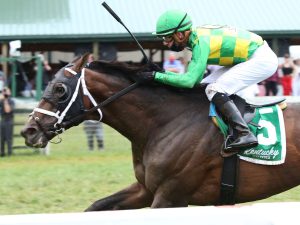 Dismissed at 11-1 odds a year ago in the Hollywood Turf Cup (G2), Oscar Dominguez came through for his backers with a neck victory over even-money favorite United and returned $24.20 on a $2 win bet.

Fast forward to Friday, and Oscar Dominguez is back for another long-shot go at it when the 7-year-old gelding takes on the likes of 5-2 favorite Arklow and 3-1 second choice Laccario in a full field of 12 going 1 ½ miles on the turf at Del Mar.

The odds seem appropriate since the Richard Baltas-trained Oscar Dominguez is 0-for-5 in 2020, most recently fifth of seven in the 1 ¼-mile John Henry Turf Championship Stakes (G2) at Santa Anita on Sept. 26.

“Oscar wants some speed to run at, but a mile and a half is his race,” said Baltas, who also saddles North County Guy in the race. “He hasn’t had a whole lot of pace to run at this year, but I think with some of the other horses in the race it shouldn’t be pace-less.

“Obviously it’s a very tough race, but Oscar maybe can do it again at 7 years old. He’s training great for it.”

Baltas’ 5-year-old North County Guy comes into the race off a nine-furlong allowance win at Santa Anita six weeks ago. North County Guy has a win over the Del Mar turf from five starts, but is taking a giant step up in class.

The rest of the field includes Red King, Say the Word, Gregorian Chant, Acclimate, Ward ‘n Jerry, Proud Pedro, Another Mystery, and Tartini. Fivestar Lynch is on the also-eligible list.

Like many of the stakes on this final weekend at Del Mar, the Turf Cup is a transfer from Hollywood Park, which shut down in 2013 after 75 years. Despite the change, this race remains as popular as ever as a post-Breeders’ Cup race for older turf runners.

A closer look at the rest of the field for Friday’s race:

Red King is one of trainer Phil D’Amato’s four runners. Though he beat just one in the Breeders’ Cup at Keeneland last out, the son of Channel is back home where he earned his most prominent victory when capturing the Del Mar Handicap (G2) in the summer. Regular jockey Umberto Rispoli will be back aboard.

The D’Amato-trained Gregorian Chant stretches out in distance after being most successful at the shorter distances closer to a mile, nine furlongs. He also trains Grade 2 winner Acclimate, who hasn’t raced since his ninth-place finish in the 2019 Breeders’ Cup Turf. Ricardo Gonzalez rides Gregorian Chant and Tyler Baze will be aboard Acclimate.

Say the Word is a 5-year-old Canada-bred gelding by More Than Ready who won the Northern Dancer Stakes (G1) at Woodbine on Oct. 18 in his most recent start. He makes his Southern California debut for D’Amato after having been previously trained by Gail Cox.

Graham Motion sends the Germany-bred Laccario out to California for his first start in his care. The son of Scalo was previously trained by Andreas Wohler, who saddled him to wins in the German Derby (G1) and Grosser Preis von Baden (G1). In his only American start, he finished second to Channel Maker in the Joe Hirsch Turf Classic (G1) at Belmont Park in early October. Manny Franco will ride.

San Luis Rey Stakes (G3) winner Ward ‘n Jerry has a win from two starts at this distance, but loves Del Mar (7-2-1-1). Jose Valdivia Jr. rides for Mike Puype. Marckie’s Water, who won the 2019 Charlie Whittingham Stakes (G2), makes his second start back from a nearly 14-month layoff for new trainer Peter Eurton after an eighth-place finish behind North County Guy last time out. Another Mystery was third in the John Henry Turf at Santa Anita two months ago for trainer Michael McCarthy and will be ridden by Mike Smith.

Tartini makes his debut for trainer Mark Glatt after former conditioner Jack Carava retired to take jockey Tyler Baze’s book. This distance may be a little far for him, though he’s certainly bred to handle added ground.