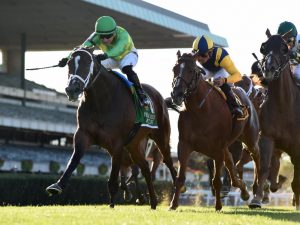 Winner of the 2019 Joe Hirsch Turf Classic (G1) at Belmont Park, Arklow rarely runs a bad race and deserves serious consideration in Saturday’s $1 million Pegasus World Cup Turf (G1). He was only 1-for-7 last year but was second three times and third once in graded stakes.

His eighth-place finish in the Breeders’ Cup Turf (G1) is better than it looks, because he was only 2¾ lengths behind superstar Bricks and Mortar after covering the most ground in the race, according to the Trakus timing system. He’s been very competitive in top company from 1 1/16 to two miles, and the turnback to 1 3/16 miles should suit him well.

Brad Cox, a rising star, is one of the three finalists for the training Eclipse Award, and his horses always deserve a close look. Arklow has stamina and enough tactical speed to stalk a slow to moderate pace, and he can rally off quicker fractions.

Arklow is making his Gulfstream debut for Cox.

“He’s a little bit of a tricky horse to figure out where he’s going to place himself,’’ said Cox. “I’ve seen him break and the rider content with where he’s sitting where he is and him taking the rider up into the race. Given that he’s 6 years old, we still haven’t figured him out. I just know he runs well.”

“Versatile veteran could finish in the money with a decent trip, and a victory would be no shock.” – Ed McNamara

“Seems to do his best running at Belmont, topped by his Turf Classic win, but seems far too inconsistent to trust in a spot like this.” – Noel Michaels

Notes: Cox’s take: “Arklow is doing really well right now. He’s always been a horse that we thought would get better with age. I do think he’s set up for a big year.” … Donegal Racing often gives its horses Irish names. Arklow is a town in County Wicklow, on Ireland’s east coast, south of Dublin. It was settled by the Vikings in the ninth century … Like the Vikings, Arklow has prospered from traveling extensively, having finished in the money 14 times at five tracks in three states.