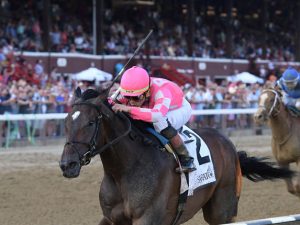 After Tax drew the outside post for the 2019 Travers (G1), trainer Danny Gargan was not happy. He promised Tax would shoot for the lead, set the pace and just keep going.

Tax, who won the Jim Dandy (G2) earlier in the Saratoga meet, stuck with leaders for a while, but wound up seventh.

Gargan is likely much happier Wednesday after his 4-year-old gelding drew the No. 2 post for Saturday’s $3 million Pegasus World Cup (G1) at Gulfstream Park. Much easier to make the lead in a field of 12 for the 1 1/8-mile race (1/8-mile shorter than the Travers), something Gargan hopes to do and pull an upset.

Tax, at 12-1, may be overlooked against the 7-5 favorite Omaha Beach and 7-2 second choice Spun to Run, but he’s also a veteran of the 2019 Triple Crown trail. The son of Arch won the Withers (G3), ran second to Tacitus in the Wood Memorial (G2), and then was 15th in the wacky Kentucky Derby (G1) and fourth in the Belmont Stakes (G1).

After the Jim Dandy win in Saratoga, where he defeated Preakness (G1) winner War of Will and Tacitus, Tax was off the board in the Travers. At that point, the gelding was shipped to Oklahoma and, according to Gargan, got sick after arriving, was scratched from the Oklahoma Derby (G3) back in September with a fever, and missed a “few key races.”

After a three-month layoff, he returned to Aqueduct and was second to Performer in the Discovery (G3) on Nov. 30. Gargan said he couldn’t be happier with the effort.

“Gelding always tries hard, but this is asking too much.” — Ed McNamara

“Winner of 2019 Jim Dandy, but ran seventh in Travers and was second in  G3 Discovery last time out … Seems like he’s in too deep in this kind of spot.” – Noel Michaels

Notes: This could be a winning distance for Tax: Of his five starts at PWC distance of 1 1/8 miles, he’s been on the board in all five – two wins,, two seconds and a third … Claimed for $50,000 out of maiden-breaking effort on Oct. 21 … bred in Kentucky by Claiborne Farm and Adele B. Dilschneider … Dean and Patti Reeves (Reeves Thoroughbred Racing), along with Stronach Stable, owned 2013 Breeders’ Cup Classic winner Mucho Macho Man, who ran second in the 2012 Classic and wound up with more than $5.6 million in earnings.