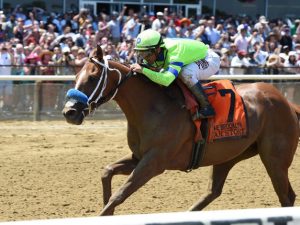 The peripatetic gelding, now 8, will be making his third appearance in the Pegasus World Cup (G1), having finished fifth in 2017 and 10th in 2018, two years in which his earnings topped $1 million. Indeed, as he enters his seventh racing season, War Story has bankrolled more than $2.9 million, an impressive number considering he has never won more than two races a year, nor does he have a Grade 1 win on his resume.

What he does have is tenacity and a willingness to roll with the punches. He had eight different trainers for his first 18 races, and finally got some continuity when Jorge Navarro took over in 2017. War Story won but three races under Navarro’s tutelage but earned $2.3 million, beginning with his first appearance in the PWC and concluding with a second in the Greenwood Cup (G3) in October at Parx Racing.

Following that, his owners, Imaginary Stables and Glenn Ellis, sent to horse to rising young trainer Elizabeth Dobles, for whom he won the Harlan’s Holiday (G3) on Dec. 14. Although he has raced on Lasix for his whole career, his connections opted to accept an invitation to the Pegasus World Cup.

“8-year-old grinder an in-and-outer who needs a much easier spot.’’ – Ed McNamara

“Usually good for a stakes win or two every year, but never up at this level of competition with no in-the-money finishes in eight prior forays against Grade 1 competition.” – Noel Michaels

Notes: His win percentage may not be that impressive, but the veteran gelding has hit the board in 66 percent of his starts …War Story has had three recorded workouts since his victory in the Harlan’s Holiday, all at Palm Meadows and all at a half-mile: 50.70 on Dec. 28, 50.40 on Jan. 4 and 50.45 on Jan. 14 … Of his 38 starts, 29 have come in graded stakes, with three victories: the 2017 Brooklyn (G2), the Monmouth Cup (G3) and the Harlan’s Holiday (G3) … Harlan’s Holiday was the first graded stakes win for trainer Dobles, who went out on her own in 2016 … War Story has enjoyed the services of 19 different jockeys, including Hall of Famers Javier Castellano and Kent Desormeaux.