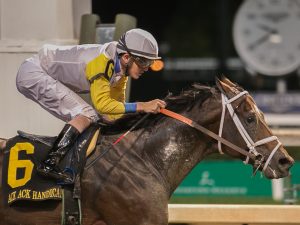 The handsome bay horse will be making his third appearance in the $3 million Pegasus World Cup (G1), having finished fifth in 2018 and a closing second in the slop to last year’s winner, City of Light. That performance capped an 18-month spell in which Seeking the Soul finished first, second or third in all but two of 11 starts (including the 2018 PWC).

Since then, the now 7-year-old son of Perfect Soul has been off the board more than he’s been on, although over the spring he was third in the Alysheba (G2) and won the Stephen Foster (G2), both at his favorite track, Churchill Downs, at which he is 4-1-4 from 12 starts. (Another pair of career wins came down the road at Keeneland).

A West coast trip to prep for the 2019 Breeders’ Cup netted him little more than a case of the “thumps” as he finished seventh in the Pacific Classic (G1) and fourth in the Awesome Again (G1) before checking in sixth in the Classic (G1). He closed out the year with a sixth in the Clark (G1), his worst performance at Churchill since coming in seventh in an optional claimer on May 4, 2017.

“His shining moment happened last year when he won the G2 Stephen Foster, but since then he’s been repeatedly beaten by Higher Power and others, and comes into this race on a streak of four consecutive off-the-board finishes.” – Noel Michaels

Notes: Seeking the Soul has been training steadily at the Fair Grounds since the Clark, his most recent breeze coming on Jan. 17 (5F, 1:00, the fastest off 27 at the same distance) … although he was but 1-1-1 from eight starts last year, the horse’s earnings topped $1.71 million, all of which came in graded stakes and helped propel Dallas Stewart to his best year ever with nearly $4.5 million in purses earned … Since 1997, when he first went out on his own, Stewart has won two graded stakes at Gulfstream Park: the 1998 Forward Gal (G3) with Uanme and the 2005 Herecomesthebride (G3) with Cape Hope.