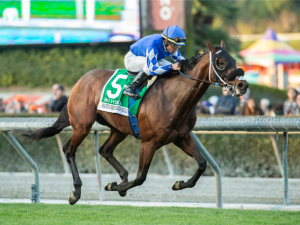 Mo Forza, a talented son of Uncle Mo, burst onto the scene late last year, but in just three starts earned a spot as one of three finalists for an Eclipse Award in the older turf male division.

The 4-year-old colt has won his last four starts, including the Hollywood Derby (G1), and Twilight Derby (G2) and Mathis Brothers Mile (G2), dating back to his maiden in late September. And though it took him five near-misses to earn that initial victory, he’s always been consistent and has just one finish worse than third (fourth) in his nine-race career.

Mo Forza looks to make it five in a row in the $1 million Pegasus World Cup Turf (G1). He is among 12 main invitees to the race at Gulfstream Park on Jan. 25.

“He’s like a big kid that finally learns to use his feet and hands and it’s all over,” trainer Peter Miller said. “He always had the talent but he never really could put it all together; I think we haven’t seen the best of him yet. He is just starting to learn and once he relaxes a little bit better and doesn’t want to lay in when he passes that last horse I think the sky is the limit, he’s just a tremendous horse.”

Notes: Bred in Kentucky by former trainer Barry Abrams’ Bardy Farm, who co-owns with Onofrio Pecoraro, who races as OG Boss … Abrams, a native of Minsk, Russia, has been battling throat cancer and beating it for 15 years … was also a former harness trainer and conditioned California’s all-time leading sire Unusual Heat, who is Mo Forza’s grandsire, after he was claimed in 1996 … based out of Miller’s San Luis Rey Downs base in Bonsall, California.