Hronis Racing owns and John Sadler trains Higher Power, a talented son of Medaglia d’Oro who stepped up to the highest level and won the Pacific Classic (G1) at Del Mar by 5 ¼ lengths for his first graded stakes score. He then finished third after a troubled start in the Awesome Again (G1) before ending 2019 with a strong closing third in the Breeders’ Cup Classic (G1), again after some trouble out of the gate.

Last year, Sadler brought Hronis Racing’s BC Classic winner Accelerate to Gulfstream Park, where he finished third in the Pegasus World Cup (G1) before being retired to stud at Lane’s End Farm.

With another strong contender for big races in southern California moving forward, Sadler decided the place to start the 2020 season for the 5-year-old Higher Power is in South Florida again with a at the $3 million purse in the World Cup.

After a winter freshening, Higher Power has been back on the worktab since late November and represents one of the stronger California-based participants in the 1 1/8-mile race. 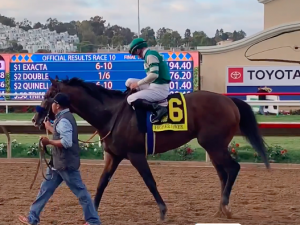 Higher Power at the Pacific Classic

“Only Grade I win in weak Pacific Classic; in over his head.” — Ed McNamara

“No slouch despite never threatening in finishing third in Breeders’ Cup Classic; will need repeat of his best outing to win this but certainly fits in all of the exotics.” — Noel Michaels.

Notes: Known by fans for his nearly all white nose … bred in Kentucky by Pin Oak Stud and purchased for $250,000 at the Fasig-Tipton Horses of Racing Age sale last April on the advice of Hronis Racing’s bloodstock advisor, David Ingordo … dam is a half-sister to Canadian Horse of the Year Peaks and Valleys … started career in the care of Donnie Von Hemel in the fall of 2017 and was transferred to Michael Stidham late last year before passing through the auction ring.