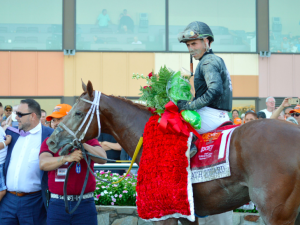 In addition, our handicapping gurus, Ed McNamara and Noel Michaels, will offer their early take on each contender’s prospects.

Up first is Math Wizard, the surprise winner of the Pennsylvania Derby (G1) back in September.

Seventeen horses were invited to each race, with a maximum field of 12 starters. Five horses are listed as reserve invitees. The post-position draw is Jan. 20.

Several top horses invited to the World Cup – DQ’d Kentucky Derby first-place finisher Maximum Security and Whitney (G1) winner McKinzie among them — are likely to bypass the race in favor of richer races over the next two months, including the inaugural $20 million Saudi Cup on Feb. 29 and the $12 million Dubai World Cup (G1) on March 28.

Multiple Grade 1 winner Omaha Beach, the Derby favorite before being scratched with a throat issue, is expected to be the Pegasus World Cup. Mile (G1) and should be the favorite. United, second in the Breeders’ Cup Turf (G1) behind Bricks and Mortar, along with Hollywood Derby (G1) winner Mo Forza, and Magic Wand (an invite to both races), are among the top horses for the Turf.

Previous winners of the World Cup are Arrogate (2017), Gun Runner (2018) and City of Light (2019). Bricks and Mortar, expected to be chosen Horse of the Year, won the World Cup Turf last year to start an unbeaten season.

A few weeks ago, The Stronach Group, which owns the Pegasus World Cup Championship Invitational Series, announced that horses in both races would compete free of medication on race day. In addition, entry fees, which totaled as much as $1 million, were dropped.

Note: In most contender profiles, jockeys will not be listed until after the post-position draw. 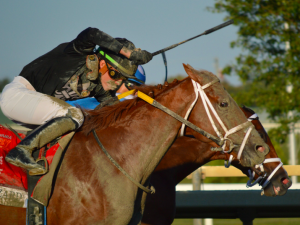 Set to kick off his 4-year-old campaign, Math Wizard aced the Pennsylvania Derby (G1) at odds of 31-1 back in September, giving trainer Saffie Joseph, Jr. the biggest win of his life.

“I’ve got to retire now,” an emotional Joseph said after the race. He’s 32.

Math Wizard was first claimed for $16,000, then claimed again for $25,000 by his current owners, and has earned over $1 million with three wins in 14 career starts.

After his victory in the Pennsylvania Derby, he ran a credible fifth in the Breeders’ Cup Classic (G1). The chestnut colt was sent off at 39-1 and was third into the stretch but was unable to sustain his rally.

In a workout on Jan. 5 at Gulfstream, Park, Math Wizard went 4 furlongs in 48.21 seconds – the ninth fastest of 89 workers going the same distance.

“Wizard: Posted a huge upset in PA Derby. Now facing older horses, but if a couple of the top Pegasus invitees opt for other spots, he can’t be ruled out of an in-the-money finish at a nice price.” – Noel Michaels

Notes: Other than his stunner in the Pennsylvania Derby at Parx, Math Wizard’s other two victories came at Gulfstream Park, both in January, and both by wide margins … Finished fourth the Wood Memorial (G2), and ran second, third and sixth in the Ohio, Indiana and West Virginia derbies (G3’s) before his win at Parx … Joseph, based in South Florida, has been training since 2011, enjoying his best year in 2019 with 280 winners from 1,307 starters and $8,306,214 in purse earnings … In last four races, Math Wizard has been ridden by four different jockeys, most recently by Ricardo Santana, Jr. … Among the multiple owners of Math Wizard is Cash is King LLC, which campaigned Afleet Alex, winner of the Preakness (G1) and Belmont Stakes (G1) in 2005.