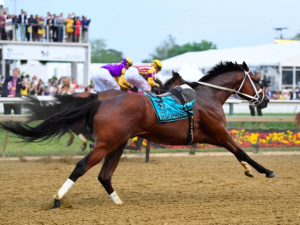 Now that he’s a 4-year-old colt, maybe, just maybe Bodexpress has learned how to behave at the start of a race.

The unpredictable Bodexpress lost his first seven races, then finished 13th in the Kentucky Derby (G1) as a maiden. Two weeks later, he unseated Hall of Fame jockey John Velazquez as the gates opened for the Preakness (G1) and ran with the field the entire race. Five months later, he broke his maiden at Gulfstream Park West, then set a track record there in winning an allowance race, but in last month’s Harlan’s Holiday (G3), he reared up and broke open the gate, sat down briefly before being backed out and reloaded,  and had the lead until fading in the stretch and hanging on for third.

Now, he’s hopefully ready to go again, this time in the $3 million Pegasus World Cup (G1) at Gulfstream Park on Saturday. Bodexpress drew the outside No. 12 post (maybe a good thing), and will be ridden by Emisael Jaramillo for local-based trainer Gustavo Delgado. The colt breezed 5 furlongs in 1:04.20 at Gulfstream Park West on Jan. 21.

After the Harlan’s Holiday, Delgado’s son, Gustavo Jr., said with better pre-race behavior, the feeling is if everything goes well from there, Bodexpress could win a big race.

This would be the one. It should be noted that Bodexpress ran second to Maximum Security in the Florida Derby (G1) at Gulfstream Park, which earned him enough qualifying points to run at Churchill Downs on the first Saturday in May.

“Who knows with this guy? A clean break could see him up front for a piece of the pie.’’ – Ed McNamara

“Lacks any consistency but seems to possess talent and a finish in the back end of the exotics is not out of the question.” – Noel Michaels