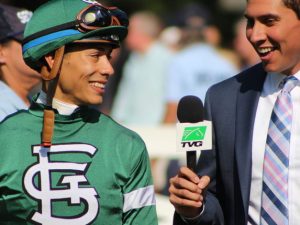 Good handicappers know that you can’t base your bets on the leading jockeys all the time, especially at the Breeders’ Cup. Let’s face it — they’re all top jockeys. At this level, you’re dealing with the best of the best, but at the same time the rider does matter — and certain jockeys have a better track record of performing well on the big stage than others.

Let’s take a closer look at some of the rising stars to bet during the two-day, 14-race $31 million Breeders’ Cup at Keeneland:

The veterans, of course, win their share: Hall of Famer Mike Smith leads the pack with 26 BC victories. Other active riders near the top of the leaderboard include fellow Hall of Famers John Velazquez (16 wins) and Javier Castellano (12 wins), and Frankie Dettori (14 wins), and Joel Rosario 11 (wins).

However, they won’t always be your key riders to wager on. This year, a group of younger up-and-coming riders are poised to make the most noise and have the  most success on Friday and Saturday.

The list of young riders off to excellent starts in their Breeders’ Cup careers is topped by IRAD ORTIZ JR., who already has a BC record of nine wins from his first 53 mounts for 17% win rate. Ortiz’s first Breeders’ Cup win came in 2014 aboard Lady Eli in the Juvenile Fillies Turf, and he has been especially deadly the last two years with two wins in 2018 followed by four wins in 2019, including Vino Rosso in the Breeders’ Cup Classic. Ortiz’s BC success has far exceeded brother JOSE ORTIZ. Jose’s record is 3-for-50 (6%).

Another jockey you want to focus on is FLORENT GEROUX, who already has five BC wins from his first 19 mounts and has the extra advantage of riding regularly at Keeneland. Geroux was winless at the 2019 Breeders’ Cup, but already owns a Classic victory aboard Gun Runner (2017) and a Distaff win aboard Monomoy Girl (2018). He will aboard favorite Monomoy Girl in Saturday’s Distaff.

The other up-and-comer is FLAVIEN PRAT. He owns only three career BC wins (8%), but he’s been in the money with 17 of his 38 mounts for an ITM rate of 45%. His most recent winner came in an upset aboard Storm the Court in the 2019 Breeders’ Cup Juvenile.

Keep an eye on LUIS SAEZ, who is 0-for-22 in the Breeders’ Cup, but has a strong hand this weekend: Among his mounts are Maximum Security in the Classic, Essential Quality in the Juvenile, Simply Ravishing in the Juvenile Fillies, Mutasaabeq in the Juvenile Turf, Valiance in the Distaff, Halladay in the Mile, C Z Rocket in the Sprint, Leinster in the Turf Sprint and Serengeti Empress in the Filly & Mare Sprint.

The Ortiz brothers could have a huge impact this weekend, too:

RELATED: The Disappointers: Breeders’ Cup 2020 Jockeys To Avoid At The Windows