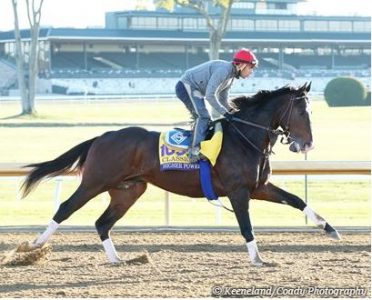 The year started wrong and didn’t get much better for the third-place horse in the 2019 Classic. Higher Power ran 10th as the 5-2 favorite in the Pegasus World Cup Invitational Jan. 25 at Gulfstream, and he’s 0-for-3 since.

John Sadler, 64, has been a terrific trainer in his native Southern California since the Eighties, with 39 Grade 1 wins, but the Breeders’ Cup never has been his happy place — 1-for-50 with four seconds and seven thirds. He was 0-for-44 until Accelerate won the 2018 Classic for Hronis Racing.

Don’t expect Higher Power to give the partnership a second one. His ceiling would be picking up the pieces for third or fourth if there’s a pace meltdown. Unfortunately, he’s backed up in the stretch in five of his last six races. If you’re feeling adventurous, maybe use him underneath in trifectas and superfectas. I won’t be playing him.

Notes: Sadler was a show jumper who tried out for the 1976 U.S. Olympic Equestrian Team. He worked as a groom and hot walker before serving as a veterinarian’s assistant and an assistant trainer. He took out his trainer’s license at 22 in 1978 and saddled his first winner the next year … Hronis Racing also owned Stellar Wind, whom Sadler trained. She ran second in the 2015 Breeders’ Cup Distaff and was named champion 3-year-old filly.