The fastest horses from all over the world meet in Lexington, Kentucky this year to compete in the Breeders’ Cup Races. With $25 million in prize money, it’s the richest, most exciting event in sports making most other sporting events look quaint.

The world’s best grass milers compete in this race around two turns around Keeneland for horses 3-years-old and older. 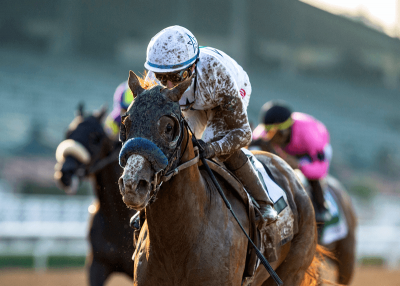 This year, the FanDuel Breeders’ Cup Mile, presented by the Permanently Disabled Jockeys Fund (PDJF), once again will be worth $2 million, raised from $1.5 million in 2007. The one-mile grass event has been held every year since the event’s inception in 1984.

European imports have fared exceptionally well in the Mile, starting with inaugural winner Royal Heroine. Though she had been training in California with then British transplant John Gosden, she began her career in Europe and won several races though her Breeders’ Cup score was her most famous and earned her an Eclipse Award as North America’s best female turf performer.

Champion French jockey Olivier Peslier and Eclipse Award winner and Hall of Famer John Velazquez have each ridden three winners to lead all jockeys. Peslier was aboard Goldikova in all of her starts while John Velazquez rode Da Hoss in 1998, Wise Dan in 2012 and World Approval in 2017.

Thanks to Goldikova, jockey-turned-trainer Freddie Head, who was Miesque’s pilot for her two wins, is the race’s leading trainer. And Flaxman Holdings (Niarchos Family) has owned six winners of this race – Miesque (1987, 1988); Spinning World (1997); Domedriver (2002); Six Perfections (2003); and Karakontie (2012). The late Stavros Niarchos himself was listed as Miesque’s owner.

The Breeders’ Cup Dirt Mile, sponsored again this year by Big Ass Fans, was run for the first time in 2007 at Monmouth Park in the first year the event expanded beyond the single day of championship races, which had been offered since 1984.

Initially because of the configuration of Monmouth’s main track and the fact the track doesn’t regularly offer races at a flat mile over their main track, the Dirt Mile was actually contested at about a mile and 70 yards. Also, Keeneland doesn’t regularly offer races at a mile so in 2015 (and again this year) the start of the race as well as the finish of the race were both backed up to keep the race distance as close to a mile as possible. The starting gate was placed 70 yards before the one-mile pole and the finish was set at the alternate finish line at the sixteenth pole making the race slightly longer than a mile.

Goldencents in 2012 and 2013 remains the only repeat winner of the race. So far, no Dirt Mile winner has gone on to earn an Eclipse Award in any division. The race was upgraded in 2007 and 2008 and was elevated to grade 1 status by 2009. Hall of Famer Jerry Hollendorfer has saddled two winners (Dakota Phone, 2010; Battle of Midway, 2017) and jockeys Rafael Bejarano and Javier Castellano have each been in the irons for two winners.

The Met Mile at Belmont Park and the Pat O’Brien Stakes were the only two Breeders’ Cup Challenge “Win & You’re In” qualifying races and were won by Vekoma and C Z Rocket, respectively. The latter is expected for this race while the former also earned a spot in the Sprint if his connections so choose by virtue of winning the Carter Handicap at Belmont Park back in June.