Modernist has to be on or near the lead, but here’s the problem: He’s not particularly fast. Both of his wins came when he was able to set or track slow fractions, and that scenario doesn’t occur often in the Classics. His three-month layoff also is a concern. 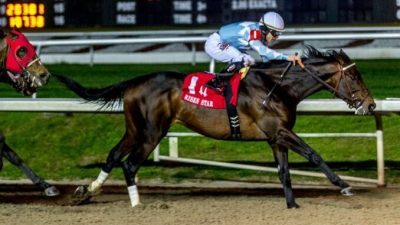 The son of top young sire Uncle Mo had little chance last time while breaking from post 14 in the 1 3/16-mile Louisiana Derby, but he still ran an even third behind wire-to-wire Wells Bayou. That performance was better than it looks, because Junior Alvarado had to use Modernist out of the gate, and he lost ground on both turns.

In his previous race, Modernist managed to pull off a 12-1 upset in the Fair Grounds’ 1 1/8-mile Risen Star by working out a perfect trip from the rail. He sat a close second behind the faster Ny Traffic (post 11) before shaking clear in the stretch.

Hall of Fame trainer Bill Mott has been keeping his options open with Modernist after deciding not to face Nadal or Charlatan in the split Arkansas Derby. With the undefeated trio of Nadal, Charlatan and Maxfield out of the Belmont, it looks like a much more manageable spot.

“If we get right up to the race and we like what we see, then the Belmont is a very good possibility,” Mott told horseracingnation.com. “We’re getting the horse ready, and we’ll see how the race is shaping up and how he’s doing. We’ll see if we think that’s the race he should run in.”

“Positional speed usually is an advantage in Belmont Park’s unique one-turn, 1 1/8-mile configuration. Modernist is game and has won twice at the distance, so if the race comes up light on speed, he wouldn’t be the worst stab at 10-1 or so. Difficult, but not impossible.” – Ed McNamara

“Winner of a division of the Risen Star also finished third in the Louisiana Derby, but has not been seen since … Has solid credentials and connections, and some running style flexibility, but will enter the Belmont with no recent prep race and may not be in the same league yet as Tiz the Law.” – Noel Michaels

Notes: Mott is only 1-for-8 in the Belmont, winning in 2010 with long  shot Drosselmeyer. He was second last year with Tacitus, the 9-5 favorite … Mott’s only other classic victory came in last year’s Kentucky Derby, when 65-1 shot Country House was placed first via the disqualification of Maximum Security.