It’s been quite an opening week at Belmont Park for trainer George Weaver, winning the Carter (G1) with Vekoma and picking up four victories from eight starters in the first four days of the meet. A pretty nice winning percentage. 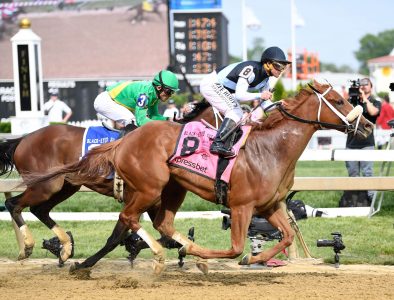 Point of Honor – US Racing Photo

On Saturday, the Louisville, Kentucky-native sends out Point of Honor in the prestigious $300,000 Ogden Phipps (G1). A field of six graded-stakes winning fillies and mares are entered for the one-turn, 1 1/16 miles over the main track.

The winner earns an all-expenses paid berth into the Breeders’ Cup Distaff (G1) at Keeneland on Nov. 7 as part of the “Win and You’re In” challenge series.

Last Saturday, Vekoma took the 7-furlong Carter by 7 ¼ lengths. Point of Honor, who will be ridden by Javier Castellano from the No. 2 post, is the 2-1 second choice behind 8-5 favorite Ollie’s Candy.

In her last race, the 4-year-old Curlin filly had a terrible start, dropped about 23 lengths behind the leader, and still wound up third (2 ¼ lengths behind winner Ce Ce) in the 1 1/16th-mile Apple Blossom (G1) at Oaklawn Park.

“We hope for a better trip,” said Aron Wellman, president of Point of Honor’s ownership group, Thoroughbred Partners, in this week’s NYRA press release. “She got pinched at the back and lost all position. She was hung wide and had to weave her way through traffic and still ran very, very well in a highly-rated Apple Blossom. I was proud of the effort that day and I’m hoping for a better trip.”

Point of Honor won last year’s Black-Eyed Susan (G2) by a half-length, then finished second three times in a row — the Coaching Club American Oaks (G1), the Alabama (G1), and in a handicap race Tampa Bay Downs in March.

Two turn races are preferred, but Wellman said his filly is talented to win on Saturday.

“Obviously, we would prefer two turns but if there is a pace up front, we would feel better,” Wellman said. “The race is at her home court, the timing is excellent, it’s an important and prestigious Grade 1 race at Belmont. We believe that she is a Grade 1 caliber filly, so to have a win in this race on her resume would be great.”

Ollie’s Candy ships in for a second trip outside California. The first time was in April when Ce Ce beat her by a head in the Apple Blossom. Trained by John Sadler, the 5-year-old Candy Ride mare won last summer’s Clement L. Hirsch (G1) at Del Mar by a head, defeating Grade 1 winners Secret Spice (second) and Paradise Woods.

Joel Rosario will be aboard the slight favorite, leaving from post No. 5.

Also entered are Pink Sands (Jose Ortiz aboard), a Tapit mare trained by Shug McGaughey; and pair from Bill Mott, Blamed and Golden Award. Look for Blamed to be up front in her Belmont Park debut as John Velazquez seeks his fifth Ogden Phipps win. Golden Award has won at Aqueduct (Turnback the Alarm) and Saratoga (Shuvee), and now looks to add a second win at Belmont to her resume.