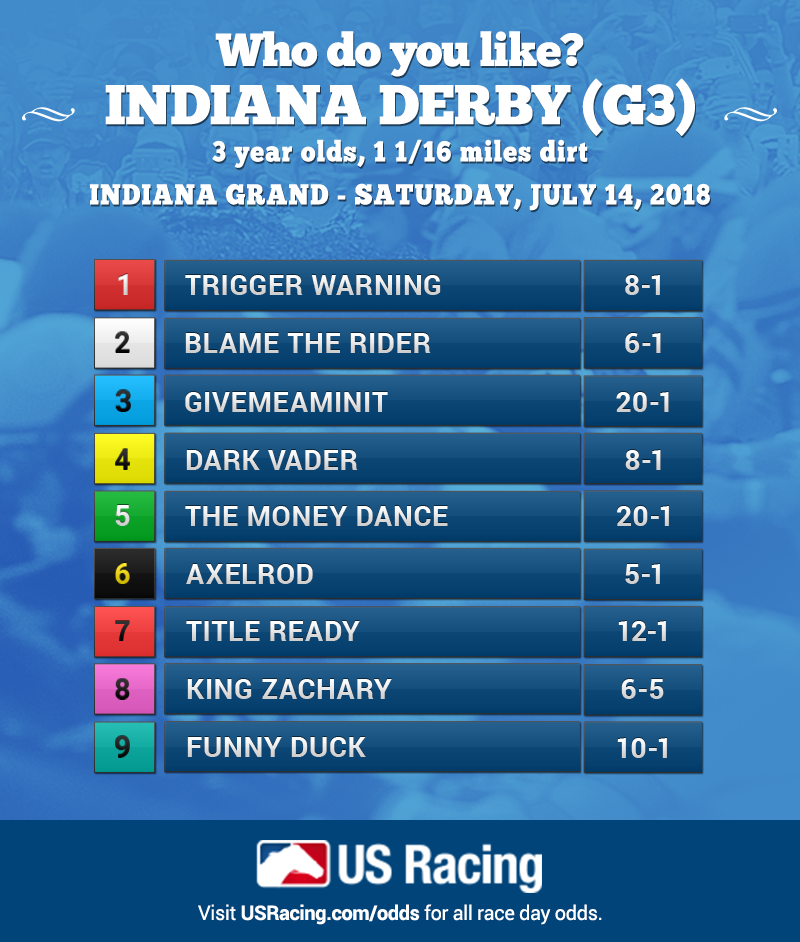 A field of nine is expected to line up for Saturday’s 24th running of the $500,000 Indiana Derby (GIII) at Indiana Grand in Shelbyville, Indiana, where Thomas Conway’s King Zachary has been made the 6-5 morning line favorite off his impressive 4 ¾-length victory in the Matt Winn Stakes (GII) at Churchill Downs a month ago.

The $550,000 Dale Romans-trained son of Curlin will face a pair of California shippers, as well as the Pat Day Mile (GIII) winner Funny Duck, hoping to rebound after a lackluster performance in the aforementioned Matt Winn.

The weather in Indiana will be hot and humid on Saturday night, but hopefully things will cool off in time for the race, which has been carded as the day’s ninth, with a post time of 9:48 p.m. ET.

Here’s a look at each runner, in post position order:

Trigger Warning ran an amazing third, beaten just a length, at huge odds in the Ohio Derby last out, behind Core Beliefs and Lone Sailor. The Tom Ridge Stakes winner hasn’t won at this distance and seems to like a shorter trip, but if he repeats his last effort he looms dangerous for a larger chunk of the purse. Irwin Rosendo rides in the Candy Ride colt’s third start for trainer Mike Rone.

Reddam Racing’s Blame the Rider is riding a three-race win streak on the turf, including a non-graded stakes score, and returns to the dirt here after previously never having finished better than third over the surface. His numbers show he’s improved on the grass, so trainer Doug O’Neill is definitely testing the graded stakes waters here in softer company, but this one seems in a bit tough. Julien Leparoux rides.

Valene Farms’ Givemeaminit hasn’t done much in graded stakes company since breaking his maiden in late January. Trainer Dallas Stewart has always been high on this colt, even as it continues to underachieve, so the conditioner has perhaps found the softest Derby spot for the son of Star Guitar to show what he’s really made of. To be fair, Stewart’s prodigy hasn’t had the best racing luck, so maybe a clean trip closer to the pace under Marcelino Pedroza may be the ticket to earning a placing.

Dark Vader ships in for trainer Pete Eurton in his first start since a very close third, beaten a neck, in the Easy Goer Stakes at Belmont on Belmont Stakes day. Previously third in the Bob Lewis Stakes (GII) at Santa Anita, this son of Tale of Ekati may have found a great spot to earn a Derby win. He has success at the distance and will be up on the pace under Corey Nakatani and, if he runs as well as he did in his last two, he will be dangerous at what will probably be a decent price.

It took seven tries for Indiana-bred The Money Dance to break his maiden, but he followed it up with a nice optional claiming win before faltering and being well-beaten in two stakes starts. He is a winner at the distance, but he’s unpredictable and hasn’t had any success here at Indiana Grand either. The Mike Lauer trainee will need his absolute best and duplicate his most recent win three back to have any say from his cruising spot mid-pack under jockey Jesus Castanon.

Slam Dunk Racing and trainer Mike McCarthy ship Axelrod in off a nice runner-up finish in the Affirmed Stakes (GIII) at Santa Anita a month ago. The Warrior’s Reward colt will no doubt stalk the early pace, if not set it, and has shown that he’s probably at his best with a little more distance. He’s not the most eye-catching work horse, but gets what he needs out of his training regimen and he won’t need to improve much off his last to be effective. Hot rider Florent Geroux will be in the irons for the first time.

Chuck Fipke’s homebred Title Ready has done well in non-graded stakes and allowance company, but just hasn’t been able to put it all together in graded stakes company. He is a winner in four tries at this distance for Steve Asmussen and his numbers suggest he’s right there with the best in here, but he’s unpredictable. He’s probably the best candidate for a last-minute exotics ticket. Ricardo Santana Jr. will be aboard.

King Zachary has won three of his last four, including the Matt Win, with his only poor performance coming in a troubled Wood Memorial Stakes (GII) try. His competition here isn’t any harder than his last — in fact, it’s much softer — and he’s been training exceptionally well at Churchill Downs since. His numbers are best here, he has some tactical ability in being close to the pace or sitting off depending on how it sets up. He’s the solid favorite for a reason. Robby Albarado rides.

Funny Duck won the very sloppy Pat Day Mile and followed it up with a somewhat troubled, yet even, fourth in the Matt Winn last out on a dry track. While the Calumet Farm-owned son of Distorted Humor hasn’t broken any numbers records, they have been useful overall and his best effort surely makes him a strong candidate for an exotics ticket. The Rusty Arnold trainee has some tactical turn of foot, which jockey Brian Hernandez Jr. will need from the far outside.