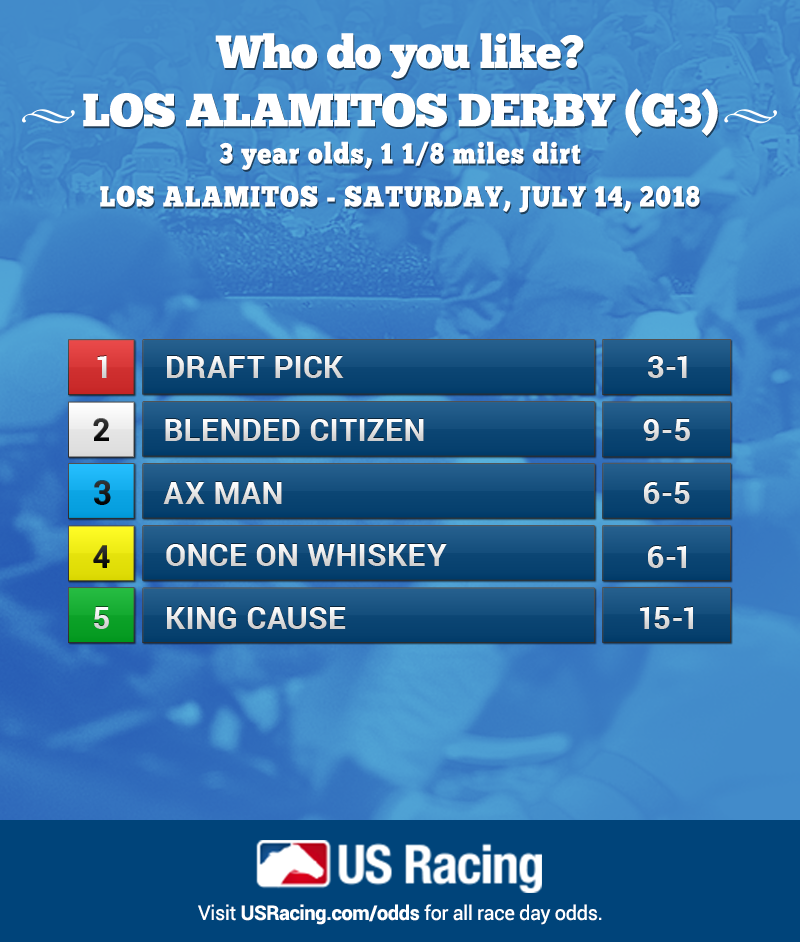 The names of just five runners were dropped into the entry box for Saturday’s $150,000 Los Alamitos Derby, which is now in its fourth year at Los Al after being run at Hollywood Park as the Swaps Stakes since its inception in the mid-1970s.

Included in the field of expected runners are three stakes winners, two of which captured graded events.

The recent scorching Southern California weather is expected to back off by Saturday and temperatures are expected to hover in the mid-80s, with no rain expected.

Hall of Fame trainer Bob Baffert has won this event a record seven time and tightens the girth a pair of runners here, including Sir Barton Stakes winner Ax Man, in search of an eighth. The Patti and Hal Earnhard homebred son of Misremembered, who captured this event in 2009, returns off a well-beaten third as the 1-2 favorite in the Matt Winn Stakes (GII) at Churchill Downs a month ago. Drayden Van Dyle returns to take the reins from a vacationing Mike Smith and the pair will break from post three, most likely headed right to the lead for a preferred spot setting the pace.

C R K Stable LLC’s Draft Pick leads the field to the gate off two wins, including his maiden score and an upset victory in the Affirmed Stakes (GIII) at Santa Anita a month ago. The Peter Eurton-trained son of Candy Ride seems to have finally found racing to his liking after failing to finish better than third in his first five starts. The $450,000 yearling purchase has been training well and has put up some decent speed and pace numbers. A repeat of his latest performance from just behind the pace under Joe Talamo makes him a good bet for a win, especially at decent odds.

Pegram, Watson and Weitman’s lightly raced Once On Whiskey makes his stakes debut off a third in allowance/optional claiming company. The stretch-out to two turns may help this son of Bodemeister improve and we all know by now to not leave out the “other Baffert” when wagering in stakes events. Flavien Prat rides and the colt will certainly get a hot pace he’s going to love running at in the lane.

A pair of Doug O’Neill trainees round out the field, led by Peter Pan Stakes (GIII) and Jeff Ruby Steaks (GIII) hero Blended Citizen. The well-traveled son of Proud Citizen was no match for the likes of Triple Crown winner Justify in the Kentucky Derby (GI) and Belmont Stakes (GI), but the SAYJAY Racing LLC colorbearer has found a spot here where he can be competitive. He can handle the distance, he’s been training exceptionally well at Santa Anita and his figures overall are strong enough for the win here. Regular rider Kyle Frey is back aboard and the pair will break from post position two.

O’Neill’s other runner, King Cause, broke his maiden back in April but has struggled in two starts since, both in graded company. Hard to imagine he’ll improve enough to defeat the favorites here.