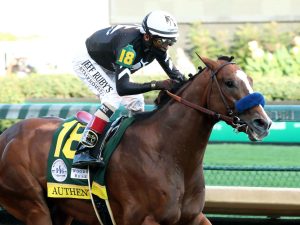 Top-class front-runner narrowly missed giving trainer Bob Baffert his record eighth Preakness win, but it took a career effort by the filly Swiss Skydiver and a great ride by Robby Albarado to do it. Historic factoid: Authentic was the first of Baffert’s six Kentucky Derby winners not to score in Baltimore.

“The filly got the jump on him and he couldn’t catch her,” Baffert said.

“He’s a little quirky,” Baffert said. “He’s a late foal who’s still maturing, and he sees things and hears things. In the Haskell, he pulled himself up in the stretch; he wasn’t getting tired. But my 3-year-olds have won this race, and he’s doing really well. He just has to be ridden aggressively from the gate.”

Baffert was asked whether he was worried about Maximum Security and Authentic getting caught up in a pace duel, especially since the two horses start from the outside posts.

“My riders know their horses, and I’ll leave it up to them,” he said. “They’ll just have to play the break and take it from there.”

Pedigree: Into Mischief-Flawless, by Mr. Greeley

Notes: Baffert’s McKinzie ran second to Vino Rosso in last year’s Classic … His three Classic wins came back to back to back — Bayern (2014), American Pharoah (2015) and Arrogate (2016) … Many thought Bayern should have been disqualified because he veered left at the start and slammed into undefeated favorite Shared Belief, who finished fourth. After an inquiry into what became a chain reaction, Santa Anita’s stewards ruled that the incident occurred at a point in the race that didn’t affect the final order of finish. Mike Smith, Shared Belief’s rider, strongly disagreed, saying, “I think it cost me the race.” Conspiracy theorists argued that Baffert benefited from favoritism at his home track.