Old Blue Eyes didn’t have too many regrets, but I am sure that you have plenty when it comes to playing the ponies. You regret that horse you left off your trifecta ticket. You regret playing that horse to win even after watching him gimp around the paddock. You regret having that second chili dog on a hot August day at Monmouth Park.

As a horizontal player I am trying to string my winners in consecutive races to hit the doubles, pick 3’s, pick 4’s, and the occasional pick 5 of 6. The worst feeling any horizontal player can have is getting to the track with a well thought out wager in mind, only to find out that several of your contenders have scratched. 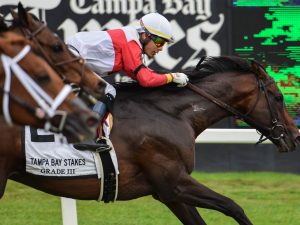 Two summers ago I spend a lazy August Friday afternoon at Monmouth Park with my friend Pensive Pete. After we arrived we had a quick bite to eat and a delicious craft beer, Pensive Pete got to work.

I checked for the scratches on my phone and read them off to him. When I had Pensive Pete read them back to me I was disappointed that two of my key contenders in the late Pick 4 which I had been targeting had scratched.

I had a decision to make. What should I do with those two races where I lost key contenders. While Pensive Pete buried his face back into the program I thought about all the times I had been burned on wagers where my contenders had scratched before. I was determined to not let that happen again. I was determined to not fall victim to the “regrettable substitution” that I had seen a thousand times.

What the heck is a regrettable substitution?

Think of it this way. Let’s say you are at your seafood restaurant. You love their crab stuffed chilled lobster. When you go to order they tell you that they are out of those delicious crab stuffed chilled lobsters and they offer you a fish sandwich instead. You say yes and are then disappointed with you lousy white bread roll, tartar sauce, and dry flaky fish patty you are served.

In terms of handicapping, it might not be as bad as that dry flaky fish patty, but you will lose money. When one of your contenders scratch you add in another horse to fill their spot or simply figure one of your remaining contenders will win. Often this is done without a through vetting of the field in that race.

So before you pick a horse to fill the spot and make a regrettable substitution on your well-crafted wager, consider the following ways that you can avoid the disappointment later.

I remember sitting in the paddock one afternoon with our good friend Rail Guy. We both had our late pick 4 wagers planned out for the fifth race when the Track Announcer Tony interrupted our riveting conversation about people littering on the beach to announce a late scratch in the seventh race. Rail Guy looked at his battered program and was quick to announce, “dat scratch doesn’t change nothing for me.”

I looked at my analysis and saw that the horse that was scratched was one of two contenders in my primary pace scenarios. While I struck the horse off my list I did notice that he was my critical pace horse for the race.

He was the horse that was dictating how the race would be run. Based on my analysis of the field he was the only horse that was set to pressure the lone one-dimensional front runner in the race.

While I had discounted the front runner due to this fact, the game had changed with this scratch. The one-dimensional front runner figured to have the lead all to himself with no pressure.

Rather than select another off the pace horse or not add in another contender, I opted to include the front runner with my remaining original contender. I was glad I did. As Rail Guy stood in disbelief after that race, I was smiling after watching this front runner win for fun with no one even within two lengths of him the entire way.

Make sure you reassess the pace of the race after the scratches are announced. Just because a horse may not have originally been a contender, it doesn’t mean he isn’t one now.

2. Who Has The Class Edge

Racing secretaries have had to get crafty to fill race cards. As a result there are allowance optional claiming races and conditioned claiming races that should probably provide an interpretative statement like they do for public questions on the ballot.

A great example of finding the class edge was on another day at Monmouth Park. There was a conditioned claiming race that was non-winners of three races lifetime, non-winners of a race in the last six months, or three year olds.

Through the course of my handicapping I was looking for horses that exceeded the non-winners of three lifetime, but either were 3-year-olds that raced against older horses or horses that hadn’t won a race in the last six months since they spend most of that time back in the barn resting.

I had narrowed the field down to a couple of off the pace horses that showed an edge either coming off a layoff or with a couple of races back off of a layoff. The scratches knocked out my off the pace contenders.

When I went back and looked at the race again, there was now a clear edge to an early presser who was a 3-year-old, but had won a total of five races, including a pair against older horses at a similar level. Instead of sliding in another plodder, I went with the classiest horse in the field and picked up a nice price on a 10-1 play.

3. Who Has The Best Pedigree or Connections

Racing secretaries love to throw in races full of first time starters and untested horses in the middle of guaranteed pool wagers. While you can’t always discern class or pace from these fields, you can look at the connections and the pedigree.

Often I will go deep in one of these fields when I like two of the other races in the sequence. I try to cut a full field down to roughly half if possible, being mindful of the cost of the ticket versus the anticipated return.

When a few of your young contenders scratch, it pays to take a second look at what is left. Who has the best trainer under these conditions? Who is bred for this distance or surface? Who has a sharp work pattern? Who has the most positive jockey change? Who had a troubled trip in their debut or last out or is trying something new today?

Back to my day with Pensive Pete, we had a lot of fun that afternoon. I collected on my late pick 4 by not making any regrettable substitutions and even sprung for drinks and appetizers on the way home.

Seasoned horseplayers and those who make their living playing the races avoid making regrettable substitutions. You can avoid them to by reassessing the pace, looking for class edges, and pedigree or connection standouts after scratches. Your bankroll will thank you later.