It’s official: The last shall be first.

The Belmont Stakes, the longtime finale of the Triple Crown series, will be run June 20 at 1 1/8 miles, around one turn and in front of empty stands because of the coronavirus pandemic. It marks the first time since 1926 that its distance will not be 1½ miles.

The New York Racing Association (NYRA) made the announcement Tuesday.

“The Belmont Stakes is a New York institution that will provide world-class entertainment for sports fans during these challenging times,” NYRA President and CEO David O’Rourke said in a statement. “While this certainly will be a unique running of this historic race, we are grateful to be able to hold the Belmont in 2020.” 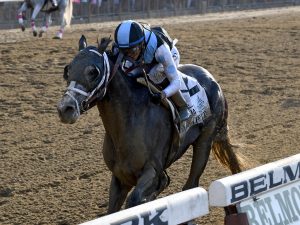 It’s possible that the top three 3-year-olds will face each other that day. Trainer Barclay Tagg said Florida Derby (G1) winner Tiz the Law would ship up from Florida to run in the Belmont.

Hall of Fame trainer Bob Baffert said Tuesday he was super happy racing is returning to New York and said he’s considering running undefeated colts Nadal and Charlatan, who dominated the split divisions of the Arkansas Derby on May 2, in the Belmont.

“Nadal, he’s the more seasoned of the two and he’ll be pointed to the Belmont,’’ Baffert told USRacing.com/news. “Charlatan would be the other one we’d look at. Authentic, he’s running June 6 (in the Santa Anita Derby).”

“I really felt bad for everyone in New York,’’ Baffert said. “It was looking pretty bleak there. I also think that Belmont race track is so huge, running that race is OK in that environment.”

The Belmont news came three days after the confirmation that Pimlico would stage the Preakness (G1) on Oct. 3, four weeks after the Kentucky Derby (G1) on Sept. 5. The first two Triple Crown events were postponed from May 2 and May 16.

So instead of completing the series three weeks after the Preakness, the Belmont will be staged 15 weeks before the middle jewel and 11 weeks before the Derby. A strange schedule in a uniquely bizarre year.

NYRA also announced that its 25-day spring-summer meeting at Belmont would begin Wednesday, June 3, and run until July 12. It will run 40 stakes, including 22 graded races.

Churchill Downs announced last week that the first four finishers in the other Triple Crown events (run prior to the Derby) would earn 150, 60, 30 and 15 qualifying points for the Derby.

For the first time in anyone’s memory, no one will be calling the Belmont “The Test of the Champion.”

NYRA’s decision to reduce its length and run it before the Derby and Preakness is historic but comes as no surprise. With the Derby on Labor Day weekend and the Preakness a month later, there was no convenient spot on the calendar for a 12-furlong marathon.

The Belmont also wouldn’t have fit in the autumn. Running it on Oct. 24, three weeks after the Preakness, would have placed it only two weeks before the grand prize, the 1¼-mile Breeders’ Cup Classic (G1) on Nov. 7 at Keeneland. Horses often recover slowly from the Belmont, an anachronism whose distance is a throwback to back when stamina in the thoroughbred was more prized than speed. No trainer would run his best 3-year-old in both races.

“Because of the way the race is now positioned, [1 1/8 miles] is the right distance,” O’Rourke told drf.com. “We respect the tradition of it, but it’s not the third leg in a five-week series anymore. It’s a 3-year-old race in June before any of the others, so the distance to us makes sense.

“It’ll be a big field. This will be the year everything goes out the window. If there is ever a time to do something different, it’s this year.”

Richard Rosenblatt contributed to this story.