It’s On! Preakness Re-Scheduled for Oct. 3, 4 Weeks After Kentucky Derby 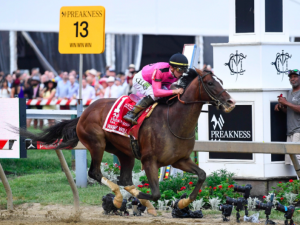 The folks who run the Preakness Stakes finally made it official on Saturday afternoon — the second leg of the Triple Crown has been rescheduled for Saturday, Oct. 3, to the surprise of hardly anyone.

The announcement was made at the end of an NBC Sports special about 2015 Triple Crown champion American Pharoah’s Preakness win on his way to becoming the first horse to sweep the Kentucky Derby, Preakness and Belmont Stakes in 37 years.

The Belmont Stakes has not been rescheduled from its’ June 6 date, but the resumption of racing in New York was approved Saturday (May 16), with Belmont Park given the OK to open on June 1 by Gov. Andrew Cuomo. Dates for upcoming races, including the Belmont, will be announced at a later date.

There is a strong possibility the Belmont could be run before the Derby and Preakness and the 1 1/2-mile distance reduced to 1 1/8 miles. The Belmont traditionally is contested three weeks after the Preakness.

Ten days ago, NBC’s local Baltimore affiliate may have jumped the gun by reporting that the Preakness would be run Oct. 3. But Maryland racing officials said that a decision had not been finalized. The affiliate later changed its’ report to say the month of October was an option.

Nonetheless, we’ll all be able to get our Preak in less than five months, but there will be no infield music festival since the popular InfieldFest was canceled due to strict safety and health precautions taken regarding the coronavirus pandemic.

“Under normal circumstances, I would have stood today at Pimlico Race Course with Ms. Stronach to present the Woodlawn Vase to the winner of the

145th Preakness Stakes,’’ Maryland Gov. Larry Hogan said. “But, as we all know, these are not ordinary circumstances. I am delighted that we were successful in working with 1/ST, the Maryland Jockey Club and all who are connected to Maryland’s Thoroughbred racing industry to set the new date of October 3rd.”

Plans for Black-Eyed Susan day, traditionally the day before the Preakness, will be announced at a later date.

“We all wish we could have been together today to celebrate the Preakness but we stayed home and stayed safe and now we can look forward to Preakness 145 on October 3rd,” said Belinda Stronach, 1/ST Chairman and President. “I would like to thank Governor Hogan and all of the state and local leaders along with our industry stakeholders, racetrack communities and partners, including our broadcast partner NBC Sports, for the ongoing support and commitment to racing in Maryland.”