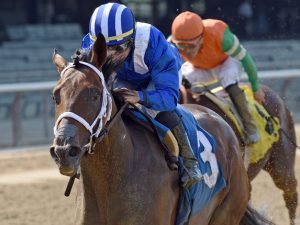 Distance limitations are the Kryptonite for True Timber, who would be a contender at a one-turn mile.

Unfortunately for this sprinter/miler, the $3 million Pegasus World Cup is run around 1 1/8 miles, and True Timber is 0-for-7 going two turns. He’s also 0-for-14 in graded stakes, including a seventh-place finish in last year’s Pegasus World Cup.

True Timber was third in last year’s Cigar Mile (G1) after running second in the 2018 Cigar, but he’s lost his last eight starts. It’s hard to imagine him breaking his three negative streaks in the Pegasus World Cup.

“Nearly achieved millionaire status with third-place finish in Cigar Mile … Seventh in 2019 PWC, but has proven himself capable of hitting board against top competition … could round out exactas or trifectas.” – Noel Michaels

Notes: McLaughlin’s take: “He’s had two good races this fall and he’s training super. We just hope things keep going well.” … Before True Timber got off the reserve list and received an official invitation to the Pegasus on Jan. 12, McLaughlin said it was “no slam dunk” that he would get in. He said he was considering the Grade 3 Fred Hooper, a one-turn mile on the Pegasus undercard, as a fallback option … McLaughlin, 59, a native of Lexington, Kentucky, is a former champion trainer in Dubai, where he spent 10 years. He trained 2006 Horse of the Year Invasor and 2006 Belmont Stakes winner Jazil. He’s one of the nicest and most approachable people in racing, and he’s remained an elite trainer while battling multiple sclerosis since 1998.