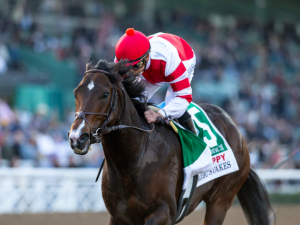 That crash you heard Thursday was the Pegasus World Cup (G1) falling apart. A few hours after second favorite Spun to Run was scratched because of a skin rash, the only star in the race, Omaha Beach, was withdrawn because of an ankle problem.

What do you call a $3 million event without a standout? To a naysayer, a huge disappointment. To a diehard horseplayer, it’s a good betting race.

Without Omaha Beach, who would have been the odds-on favorite, the Pegasus lost much of its luster. NBC, which will televise it and the $1 million Pegasus World Cup Turf on Saturday from 4:30-6 p.m. ET, it’s a bummer. But to fans of exotic bets, it could be a bonanza. Suddenly, what shaped up as a one-horse race became an intriguing puzzle.

Don’t be Googling to look for updated odds. There won’t be any because Saturday’s programs were being printed before Omaha Beach’s scratch was announced Thursday. Just play it by ear and make your best guess on who will be favored. It’s pretty certain the top betting choices will be Mucho Gusto and Higher Power, with not much between them.

And don’t be surprised if the two big scratches dropped the race into the lap of a trainer with an uncanny knack of winning megabucks stakes. The thinking is Mucho Gusto has the credentials and the running style to take the Pegasus for two-time Triple Crown winning trainer Bob Baffert, who sent out Arrogate to win the first PWC in 2017.

In addition, Baffert has the services of two-time Eclipse Award winner Irad Ortiz, Jr., who doesn’t ride for the California-based trainer since they are based on opposite sides of the country.

While Hall of Famer Mike Smith has been Baffert’s go-to guy in recent years, this will be just the 11th start in seven years for the Baffert-Ortiz combo (one win, back in 2013 at Aqueduct). 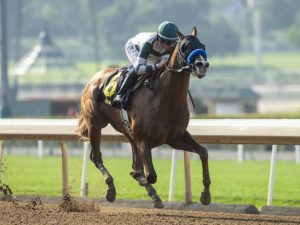 Mucho Gusto has tactical speed and five wins in 10 career starts, and he may not have shown his best yet. He’s run respectably against stars Maximum Security and Code of Honor, and there’s nobody that good in the Pegasus. Mucho Gusto probably will stalk likely pacesetter Bodexpress, who will start backing up near the stretch. With the top two out, it looks like the next two choices, Mucho Gusto and Higher Power will be the horses to beat, but let’s not count out Tax, especially if he’s back in form when he won the Jim Dandy (G2) at Saratoga.

Of course, can we leave out PWC veteran Seeking the Soul, a long shot indeed, but competing in this race for the third time. The Dallas Stewart-trained 7-year-old was fifth in 2018 and second last year behind City of Light. He won the Stephen Foster (G2) last June, his only victory in eight starts in 2019.

“He ran second last year to a great horse,” said Stewart. “He came back and had a big win in the Stephen Foster, he’s healthy and he’s ready to go. This horse is always doing good, but he’s had a couple really good works as of late. He worked three-quarters in (1:12 Jan. 10) and followed it up going in a minute. He’s feeling good, he’s galloping good, so we’ll see.”