On With the Triple Crown Show: Tiz the Law Tops Field for Belmont Stakes

The last shall go first; the longest shall be the shortest.

Welcome to this “Alice In Wonderland” version of the $1 million Belmont Stakes (G1) on Saturday. Everything we thought we knew about the “Test of the Champion” goes out the window as we plunge down the 2020 Triple Crown rabbit hole.

Things are upside down this year as the racing world copes with the coronavirus pandemic. The Belmont, usually the concluding race in the series, is now batting leadoff. It will get curiouser and curiouser when we witness a Kentucky Derby (G1) on the first Saturday in … September.

Now it begins with a Belmont reduced to 1 1/8 miles, three furlongs less than its traditional marathon distance.

It will be strictly a television production this time. No fans will be admitted. Even the owners, who put up millions of dollars to acquire and train these 3-year-olds, are barred. An eerie silence will blanket the grandstand on what is usually the most raucous day of the year at Belmont.

To the surprise of nobody who has followed this fragmented Road to the Triple Crown, Tiz the Law was designated the 6-5 favorite from post 8 with Manny Franco aboard for trainer Barclay Tagg.

Tiz the Law was the dominant winner of the Holy Bull (G3) and Florida Derby (G1) over the winter to improve his career mark to 4-0-1 in five starts.

Even the usually curmudgeonly Tagg seems relaxed and confident in the knowledge he has the horse to beat.

For Tagg and Sackatoga Stable, the Belmont represents unfinished business. They brought Funny Cide to the 2003 Belmont with the Triple Crown sweep on the line. The gelding finished third on a sloppy track.

A wet track could also be Tiz the Law’s Achilles heel. His lone defeat was in the slop last November in the Kentucky Jockey Club (G2) at Churchill Downs.

The forecast for Saturday lists a 40 percent chance of showers and thunderstorms. The temperature should top out at 80 degrees.

On the topic of unfinished business, Reddam Racing and trainer Doug O’Neill were late entrants in the Belmont field with Fore Left. They also were also in position to sweep a Triple Crown in 2012 with I’ll Have Another. He was scratched the morning before the Belmont with a tendon injury and never raced again.

Fore Left is 30-1 on the morning line from post 6 with Jose Ortiz aboard. Primarily a sprinter, Fore Left would likely have remained in California if this Belmont was contested at the traditional 1 1/2 miles. 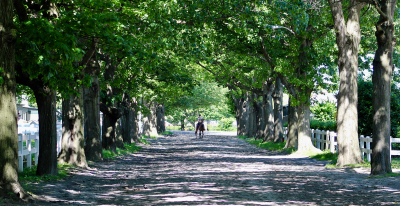 Fans of the quick turnaround angle will love Sole Volante who earned his way here with an allowance victory June 10 at Gulfstream over a deep field that included stablemate and Fountain of Youth (G2) winner Ete Indian.

Luca Panici, a Gulfstream Park regular rarely seen at Belmont, has the ride on the 9-2 shot for trainer Patrick Biancone.

Sole Volante is 4-1-1 in six starts, including the victory in the Sam F. Davis Stakes (G3) at Tampa Bay Downs.

“We’ll see how good he is Saturday,” Biancone said. “No question, Tiz the Law is the horse to beat but he totally deserves this opportunity.”

It wouldn’t be a Belmont without Todd Pletcher, who has won this race three times. He will saddle Dr Post (5-1 from post 9 with Irad Ortiz up) and Farmington Road (15-1, post 5, Javier Castellano).

Max Player has had the longest gap without a race. This is his first start since capturing the Withers Stakes (G3) at Aqueduct on Feb. 1.

Mark Casse puts a two-race Triple Crown winning streak on the line with Tap It to Win (6-1 from the rail, John Velazquez). Casse, who will be inducted into the Hall of Fame in August, captured last year’s Preakness (G1) with War of Will and the Belmont with Sir Winston.

So there is the lineup for the first jewel of this surreal Triple Crown. Sit back, enjoy and perhaps squeeze in time for a mad tea-party.