A last-minute switcheroo has Fore Left running in the $1 million Belmont Stakes (G1) on Saturday rather than the $250,000 Woody Stephens on the undercard.

After considering a not-so-stellar field and the reduced Belmont distance to 1 1/8 miles around one turn from the traditional 1 ½ miles over “Big Sandy,” trainer Doug O’Neill figured why not go big since his 3-year-old has been training so well. 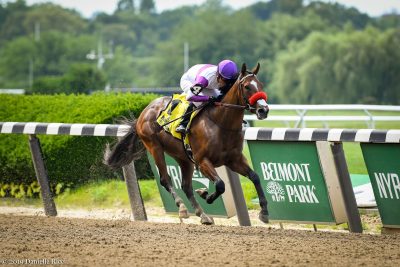 Fore Left is not coming out of left field. The 3-year-old son of Twirling Candy won the UAE 2000 Guineas (G3) on Feb. 6 at Meydan Racecourse, and was on course to run in the UAE Derby on March 28 before Dubai World Cup day was canceled because of the coronavirus pandemic.

Owned by J. Paul Reddam (he and O’Neill won the Kentucky Derby and Preakness with I’ll Have Another in 2012), Fore Left won three of seven starts as a 2-year-old, taking the Tremont at Belmont and then returning to California, where he failed to hit the board in a pair of Grade 1s last September, the Del Mar Futurity and the American Pharoah.

Fore Left did win the Sunny Slope Stakes at Santa Anita, and ran third in the Cecil B. DeMille (G3) to end his 2-year-old season.

O’Neill told drf.com that “we really like the one turn, 1 1/8-mile layout and the lack of a lot of speed projected in there.”

“Stakes winner at Belmont at 5 1/2 furlongs (Tremont) as 2-year-old … has stretched out successfully only to one mile so far in UAE 2000 Guineas … lost on turf and synthetic but is clearly best on dirt … I’m just not sure 1 1/8 miles will be his forte, especially versus the likes of Tiz the Law.” Noel Michaels

Notes: O’Neill has had one previous Belmont runner – Blended Citizen finished ninth in 2018 … The day before the 2012 Belmont, his Derby and Preakness winner I’ll Have Another was pulled from the race and retired with a tendon injury … In addition to his win in the 2017 Belmont with Tapwrit, Ortiz has finished second the past two years, with Gronkowski in 2018 and Tacitus in 2019 … According to Reddam, Fore Left is named after a friend who lives in the Bahamas because of the way he hits the golf ball – “meaning, it’s going left.”