Trainer Patrick Biancone knows a thing or two about getting a good 3-year-old to the big dance — his Lion Heart was a Grade 1 winner at 2 and finished second to Smarty Jones in the 2004 Kentucky Derby (G1). 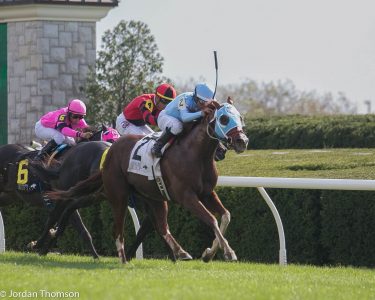 Sixteen years later, the Frenchman has Sole Volante, a talented son of 2014 Breeders’ Cup Mile (G1) winner Karakontie. The gelding has a turf-biased pedigree, but Biancone has turned him into one of the better 3-year-olds on the Triple Crown trail (on dirt). Sole Volante won the Sam F. Davis Stakes (G3) in February, and then ran second in the Tampa Bay Derby (G2) in March.

And now he’s headed to the $1 million Belmont Stakes (G1) on June 20 off a nice allowance win at Gulfstream Park on June 10. The 1 1/8-mile Belmont – the first leg of the restructured Triple Crown due to the coronavirus pandemic — will be a quick turnaround, but Sole Volante had a nice three-month COVID-19 break after the Tampa Bay Derby, so he’s hardly over-raced or tired.

“He’s a horse that’s like a human,” Panici said. “His brain is fabulous.

“I’ve known him from the beginning, and he’s just a wonderful horse to ride. I have to thank all the connections to give me this huge opportunity. He’s just a really great horse.”

“Deep closer 3-for-5, all in the money; never tried 9 furlongs but belongs underneath in exotics.’’ – Ed McNamara

“Looms the obvious second choice after a late decision to run following allowance win at Gulfstream Park on June 10 … Winner of the Sam F. Davis on dirt, and last fall’s Pulpit Stakes on turf comes from far back and never runs a bad race.” – Noel Michaels

Notes: Colt is co-owned by the trainer’s daughter, Andie, in a partnership with Reeves Thoroughbred Racing, who famously campaigned 2013 Breeders’ Cup Classic (G1) winner Mucho Macho Man and last year’s Jim Dandy (G2) winner Tax … Flaxman Holdings homebred can certainly be considered a bargain for his current owners as he brought just $6,000 as a Keeneland September yearling in 2018 and only $20,000 as an Ocala Breeders’ Sales 2-year-old in training 14 months ago … Biancone had his left kidney removed in March due to cancer, and was pronounced cancer-free a week later.