With a whole lot of shuffling going in the past 10 days, the $1 million Belmont Stakes (G1) has a new look, and Pneumatic is in the picture.

With Bob Baffert’s dynamic duo of Nadal and Charlatan sidelined, along with unbeaten Maxfield, the owners of Pneumatic figured ‘why not? 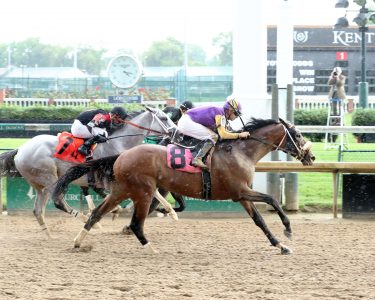 “A couple of things went into the decision. In addition to the fact that he’s been training really well and worked well last week, the changes that have been made in terms of defections and horses going to other races also are reasons why we’re going. It was either this or Ohio (Derby on June 27) and the Belmont is an American classic. To have some Grade 1 black type in a Triple Crown race would be highly beneficial.”

This year’s Triple Crown races have been rescheduled due to the coronavirus pandemic, and the Belmont is now the first leg of the series, set for Saturday, June 20.

He broke his maiden on Feb. 15 at Oaklawn, winning at 6 furlongs by a neck. On April 11, he won around two turns in an allowance optional claimer, defeating Captain Bombastic by 2 ½ lengths. In the Matt Winn on May 23, Pneumatic led the field near the 5/16ths pole, moved off the rail but still fought down before yielding to Maxfield and Ny Trafffic.

“Lightly-raced, but has speed and certainly belongs versus this year’s Belmont field.’’ – Noel Michaels.

Notes: Hall of Famer Asmussen, still looking for his first Kentucky Derby  win, has one Belmont victory to his credit — Creator in 2016 … Winchell Thorougbreds has started one Belmont runner previously, Tenfold, who finished fifth in 2018 to Triple Crown winner Justify.