The Calumet Farm homebred won Remington Park’s Clevor Trevor Stakes at 7 furlongs as a juvenile last November, but Jungle Runner hasn’t been able to finish in the money in four starts since.

Nonetheless, he’s headed to the $1 million Belmont Stakes (G1) on Saturday (June 20) for Hall of Fame trainer Steve Asmussen, who also will saddle Pneumatic in the 1 1/8-mile first leg of the reshuffled Triple Crown.

Last time out on May 20, Jungle Runner was next to last as the 60-1 long shot in the easier division of the Arkansas Derby (G1). 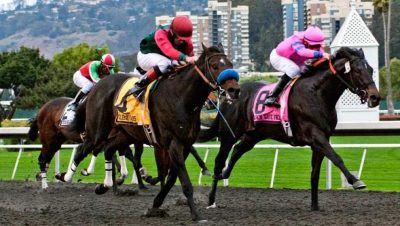 The son of Candy Ride will try to give Asmussen a second Belmont win – he won with Creator in 2016. Let’s not forget the Asmussen-trained Curlin (a two-time Horse of the Year) was a close second to the filly Rags to Riches in 2007 in one of the most thrilling editions of the Belmont with no Triple Crown on the line.

Asmussen, who recently became the leading trainer at Churchill Downs with 738 career victories, is closing in on another significant milestone. At the start of Sunday (June 14), he had 8,870 career wins, 576 victories behind all-time North American leader Dale Baird (9,445).

The veteran conditioner will give a leg up to the 23-year-old Reylu Gutierrez, who was a finalist for the Eclipse Award as top apprentice last year. This will be his first mount in a Classic, or a Grade 1 race, for the Rochester, New York native.

“I’ve been preparing for this my whole life,” Gutierrez told the NYRA press
office. “Last year, I rode in the New York Derby up in Finger Lakes, and
that’s the biggest race at Finger Lakes. I lost that race; it was a heartbreaker since a lot of people from home were cheering me on and
came up to see me. But the Belmont is the biggest race in New York, so I’m very excited. I haven’t had a lot of these moments, but I’ll be prepared. I approach it like any other race,” Gutierrez continued. “I have a job to do out there. You have to prepare, get there early and get my jog in before the races. I’m just really happy to be out there. I’ll take a moment before the race and have it sink in. But once we’re on to the post parade, it’s time to focus.”

After the win at Remington, Jungle Runner finished fourth in the Springboard Mile at Remington, eighth in the Smarty Jones Stakes at Oaklawn Park, fifth in the Mine That Bird Derby at Sunland Park and eighth in his division of the Arkansas Derby.

Running style: From off the pace

“Vanity entry for Calumet Farm; eighth last out in Arkansas Derby; in way over his head” – Ed McNamara

Winner at Remington last November is not only winless since, but has not even been able to hit the board versus stakes company … Asmussen just taking a stab at a placing in field that lacks depth. — Noel Michaels

Notes: Asmussen is a two-time Eclipse Award winner (2008-09) and three of his charges were Horse of the Year (Curlin, 2007-08; Rachel Alexandra, 2009; Gun Runner, 2017) … Calumet Farm, which was purchased by reclusive and intensely private billionaire Brad Kelley in 2012, is one of thoroughbred racing’s most storied racing and breeding operations dating to 1924. Calumet campaigned two Triple Crown winners: Whirlaway (1941) and Citation (1948) … Calumet purchased Minx, the dam of Jungle Runner, for $190,000 while she was in foal to Candy Ride at the 2016 Keeneland November Breeding Stock sale. Jungle Runner is her only offspring … Gutierrez, who earned a degree in exercise physiology at Cortland State University, said he was shocked when Asmussen gave him the call as he thought he was just working the horse before a more well-known rider took over … He has one graded stakes score on his resume, the Tom Fool (G3) aboard Do Share … He is the son of trainer Luis Gutierrez and the nephew of jockey Jose Gutierrez.