Just Another Day at the Races

The racing came fast, with a few furious finishes to boot, on a Saturday afternoon when multiple networks showcased thoroughbreds and standardbreds, a delightful day at the races for fans, gamblers, and horse lovers.

In one 45-minute span, you could have watched: 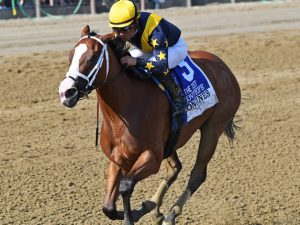 Live from Saratoga Race Course, where Covfefe is outdueled Serengeti Empress in a stretch-long battle to win the $500,000 Test (G1)

Less than 10 minutes later, on another network, there was long shot Forbidden Trade holding off heavy favorite Greenshoe at the wire to win the $1million Hambletonian at the Meadowlands in the first leg of trotting’s Triple Crown.

Less than a half-hour later, switching channels to get back to the Spa, McKinzie won the $1 million Whitney Stakes (G1) for an emotional Bob Baffert, the Hall of Fame trainer who named the horse for close friend Brad McKinzie, a Los Alamitos Race Course executive who died in 2017.

There was a whole lot more, including Mr. Money cashing in at the West Virginia Derby (G3) a few minutes after the Whitney, and then a surprise at Del Mar, where 4-5 favorite Vasilika, seeking to go 5-for-5 this year for trainer Jerry Hollendorfer, finished a close third behind Beau Recall and runner-up Storm the Hill in the Yellow Ribbon (G2).

It was a day of mixed emotions for Baffert, who choked up during the post-race interview thinking of his friend, but also aware that the city and track were paying tribute to Marylou Whitney, who passed away last week at the age of 93.

“This win is very emotional for me,’’ Baffert said. “I was telling John (Hendrickson, husband of the late Marylou Whitney) this horse was named after a close friend of ours that passed away a few years ago. I got very emotional after he won. I’d never won this race and wanted to see her (Whitney) here so it’s kind of sad. It’s a great honor to win the Whitney.”

Looking ahead, McKinzie remains at the top of the class for the Breeders’ Cup Classic (G1) at Santa Anita on Nov. 3. The 4-year-old son of Street Sense bounced back from his runner-up finish in the Metropolitan Handicap (G1) at Belmont Park on June 8 and improved his record to 12-7-4-0 and earnings of $2,238,560 for owners Karl Watson, Mike Pegram and Paul Weitman.

Baffert heads back to Del Mar, but his trips to Saratoga remind him how popular racing can be.

“This is unbelievable. This is real horse racing right here,’’ he said. “Until you’ve been here and experienced it, it’s just a beautiful scene and when you see that you know that racing is still alive and strong.”

It will be quite strong at Arlington Park next weekend, with Arlington’s International Festival of Racing set for Saturday, featuring Bricks and Mortar, the choice so far by many as the No. 1 horse in the country, in the Arlington Million.

Last time we ran into the Chad Brown-trainer Bricks and Mortar, the 5-year-old son of Giant’s Causeway was defeating stablemates Robert Bruce and Raging Bull in the $1 million Manhattan (G1) on turf at Belmont on June 8. His last four workouts at Saratoga have been impressive, the most recent coming Sunday, four furlongs in 49.05 seconds.

Bricks and Mortar, 4-for-4 this year, could again face the same stablemates, with Robert Bruce looking to win a second straight Arlington Million. 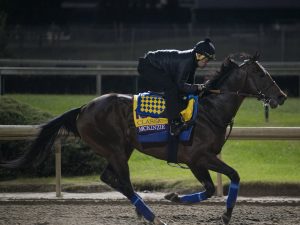 McKinzie, ridden by Hall of Famer Mike Smith, outkicked Yoshida and won the 1 1/8-mile Whitney  by 1 ¾ lengths. Sent off as the 4-5 favorite in a field of seven (Thunder Snow was scratched), McKinzie ($3.70 on a $2 win bet) won his fourth Grade 1 in earning an automatic berth in the BC Classic.

Baffert, a two-time Triple Crown winner, has won just about every race in creation, and after Saturday he was finally able to say “I’ve got my Whitney.” He also may have the best older male in the country. McKinzie improved to 7-4-0 in 12 career starts – his only off-the-board finish was last year when he was 12th in the BC Classic.

Baffert says he’d like McKinzie to race once more before the Breeders’ Cup.

Covfefe, owned by LNJ Foxwoods, moved into contention with leader Serengeti Empress around the turn and prevailed by a half-length in the seven-furlong race for 3-year-old fillies. Third-place finisher Bellafina, a three-time Grade 1 winner, was 8 ¾ lengths back. Covfefe ($8.50), trained by Brad Cox, covered the distance 1:21.26 under Joel Rosario.

Also at the Spa, Leinster ($13) held off Disco Partner to win the $200,000 Troy for trainer Rusty Arnold, who also captured the $750,000 Saratoga Oaks on Friday with Concrete Rose.

Odds-on choice Amalfi Sunrise ($3.40) drew off in the stretch and won the $200,000 Sorrento Stakes for 2-year-old fillies by six lengths over Powerfulattraction. Trained by Simon Callaghan, the daughter of Constitution won her only other start by 6 ¼ lengths at Santa Anita on June 23, so this will be a filly to watch moving forward. Winning time for the six furlongs was 1:10.96. The race is a steppingstone to the $300,000 Del Mar Debutante on Aug. 31.

Beau Recall, bred in Ireland, nosed out 10-1 long shot Storm the Hill in a photo finish to take the $200,000 Yellow Ribbon, with 4-5 Vasilika finishing third in the handicap race for older fillies and mares.  Julien Leparoux was aboard Vasilika, subbing for Flavien Prat, who was riding at Saratoga. Trained by Brad Cox, 5-year-old Beau Recall returned $6 with her seventh win in 24 career starts. Winning time for the 1 1/16 miles was 1:41.23. 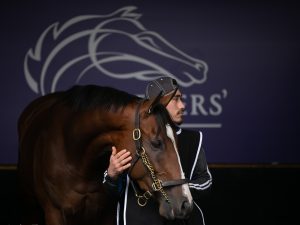 Trained by Bret Calhoun, the colt ran away from the field in the stretch and won by six lengths under Gabriel Saez at Mountaineer Casino, Racetrack & Resort.

“Hopefully there are bigger and better things for us,” Chester Thomas, the principal of Allied Racing, said.

Mr. Money came into the race with a trio of Grade 3 wins, the Pat Day Mil, the Matt Winn and the Indiana Derby. Chess Chief was second, with Plus Que Parfait third. Winning time for the 1 1/8 miles was 1:50.28.

It was a day to remember for 28-year-old Canadian driver Bob McClure,, who won his first Hambletonian in upset fashion with Forbidden Trade ($33.80) holding off favorite Greenshoe by a neck.

It was a day to forget for 27-year-old Swedish trainer Marcus Melander, who sent out three trotters in the final only to come up short with Greenshoe. His other finalists Gimpanzee and Green Manalish S, finished third and fifth, respectively, in the field of 10 3-year-old trotters.

The winning time for the final was 1:51. The second leg of the trotting Triple Crown is the Yonkers Trot on Aug. 31.

In the $500,000 Hambletonian Oaks for 3-year-old trotting fillies, When Dovescry posted a two-length victory over previously undefeated Millies Possession.