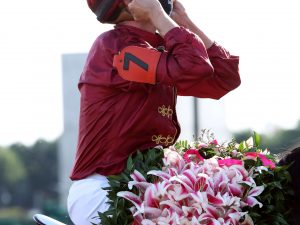 To the bow-tied, be-jeweled and be-hatted fans at the 2015 Breeders’ Cup, the little group which had arrived at Keeneland from Mongolia appeared as if dressed for a costume party. (It was, after all, October 31).

They came to the races wearing garb traditional in Mongolia: squat black hats topped with golden spires along with vividly colored tunics called deels.  They stood out among even the most extravagantly dressed racegoers like peacocks among sparrows. No one realized the men were Buddhists who prayed for their horses before a race and held fast to a Mongolian belief that if you stand in the dust of a winning horse, or touch its sweat, your luck might take a turn for the better.

Certainly, luck was the word of the moment as Mongolian Saturday surprised the crowd by winning the Turf Sprint, paying the highest price of that year’s Breeders’ Cup ($33.80). The horse was a virtual nobody prior to the race. He had raced in Florida, Pennsylvania, Ohio, West Virginia, Illinois and Kentucky yet he was not to make a name for himself until Saturday of the two-day Breeders’ Cup, winning his turf race by a neck under jockey Florent Geroux.

The Breeders’ Cup crowd might also have been surprised to learn that the people accompanying Mongolian Saturday had not just got off the bus from the Asian steppes. Ganbaatar Dagvadorj and his brother, Tserenjigmed, racing as Mongolian Stable, are business moguls in their country and owners of a massive holding company called Max Group. The company owns apartment buildings, a shopping mall, restaurants, a supermarket, a mining company and other businesses. It brought the first Burger King franchise to Mongolia. Then-vice president Joe Biden’s advance team of about 100 had stayed in a hotel Max Group owns, a Ramada Inn at Ulaanbaatar, Mongolia.

Trainer Enebish Ganbat (people call him Ganbat) is no slouch, either, having graduated from the Moscow Institute with an electrical engineering degree. Fluent in Russian as a second language, he spent eight years working at a power plant before he ditched that job to train the small horses indigenous to Mongolia, horses that look more like ponies.

(He told the Daily Racing Form to refer to him as “Ganbat” because he said there are no surnames in Mongolia. A son’s name is thus joined with his father’s name, and his father was Enebish. “When you are calling me my father’s name, Enebish, you’re calling me a dead person,” he explained. So, call him Ganbat.)

Racing learned more about Mongolian culture on that Breeders’ Cup afternoon that it ever thought it would.

The owners of Mongolian Stable and their trainer had known life under Soviet rule, when the Mongolian People’s Republic functioned virtually as a USSR satellite.

Private business was forbidden under communism but these two brothers were honing entrepreneurial skills from their teen years onward, despite the rules forbidding such dealings. From horseback in remote rural areas, they traded in the pelt of fur-bearing animals. When communism fell in the early 1990s, one business success led to another for the brothers who eventually started Mongolian Stable.

Ganbat met Ganbaatar Dagvadorj in 1999 on a hunting expedition. Following the fall of the USSR he occasionally worked as a guide for hunters from western countries visiting Mongolia, camping in yurts along with a golden eagle trained for hunting fox and wolves.

Like the two brothers who became his clients, Ganbat appreciated horses. He said he pursued the life of a Mongolian horse trainer because he was finding his engineering career too boring. Indeed, a career highlight during his 10-year stint training the horse-ponies saw one of his charges win a race made up of 720 horses (can you picture that start?) going 25 kilometers.

By the time he met Ganbaatar Dagvadorj he was ready for another change. The men switched to thoroughbreds.

“We came to America to win big races,” Ganbat told the South China Morning Post. He singled out the Breeders’ Cup and the Kentucky Derby. One down, one to go.

The Breeders’ Cup Turf Sprint was Mongolian Saturday’s 10th start of 2015. In his previous race he had finished second on the turf in the Woodford (G3) at 5 1/2 furlongs at Keeneland. In the Turf Sprint, Mongolian Saturday broke from the outside of a 14-horse field. He was racing second behind the pacesetter, Ready for Rye, when he pulled out around that horse on the far turn and forged a two-length lead by midstretch. He had to fend off Lady Shipman approaching the wire but he got the job done, finishing the 5 1/2 furlongs in 1:03.49. With that, he won for the seventh time in 33 starts.

Mongolian Saturday had a checkered career following his Breeders’ Cup win. He ran in Hong Kong, was scratched with colic from a race in Dubai, and raced in England twice before a veterinarian in the UK discovered the horse had a stomach ulcer. He was treated with medicine and royal jelly from bees. He was pretty much healed of the ulcer when he returned to Keeneland in 2016, winning the Woodford.

He tried the Breeders’ Cup Turf Sprint again, this time at Santa Anita, but finished only ninth. On a third attempt at that race, at Del Mar in 2017, he ran 12th. He raced three more times without winning.

In June 2018 in California, Ganbat announced that Mongolian Saturday had retired due to suspensory ligament issues. The gelding had won eight of 48 races and earned $1.3 million.

Not bad for a horse whose connections showed up at Keeneland drawing second (and third) looks from the crowd even before they gathered in the winner’s circle with the highest-priced winner of the championship event.