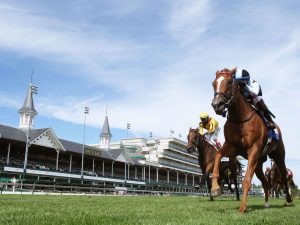 When it comes to multiple winners in a race, sires get all the credit. Bull Lea, Falsetto, and Virgil all produced three Kentucky Derby Winners. More Than Ready has produced a record seven Breeders’ Cup winners, and has a shot to add a few more to that list this year.

It doesn’t take a stretch of the imagination to figure out why some sires have so many winners in big races. In 2020, The Jockey Club released their Report of Mares Bred stats which showed that in North America 1,067 stallions covered 27,970 mares. That is one stud for 26 mares on average.  So while it is impressive to see how strongly More Than Ready progeny have been fairing in Breeders’ Cup races, it is more impressive to see a mare that has produced multiple winners, or Breeders’ Cup winning dams that have produced another Breeders’ Cup winner.

In 1993, Hollywood Wildcat won by a nose over Paseana to capture the Breeders’ Cup Distaff after a thrilling stretch duel. She would go on to have a respectable campaign in 1994, but would fail to defend her title at Churchill Downs the following year.

Her first foal would be her best, War Chant. War Chant would break his maiden in his debut in 1999 and peel off an allowance win, a win in the San Rafael Stakes (G2), and a second-place finish in the Santa Anita Derby (G1) before a disappointing ninth-place finish in the Kentucky Derby (G1). He would take the 2000 running of the Breeders’ Cup Mile (G1) with a big late run to catch pace setting North East Bound.

In 1988, Personal Ensign won the Distaff by a nose to put the exclamation point on her perfect 13 for 13 career.

Seven years later, her daughter My Flag would take the 1995 Juvenile Fillies (G1)  in an equally thrilling fashion with Jerry Bailey in the irons.

Seven years after that in 2002 her granddaughter, Storm Flag Flying, would give us yet another dramatic finish as she fell behind Composure only to reach back and regain the lead and win going away.

In 2010, Shared Account got up late to upset even money favorite Midday at the wire at 46-1 to capture the Filly & Mare Turf (G1) in what would be her first and only Grade 1 stakes victory.

In 2019, her daughter Sharing would also provide the upset as she got up late at 13-1 to take the Juvenile Fillies Turf (G1). Unfortunately she will not be looking to return to Keeneland in 2020 due to a foot injury.

This Irish mare also produced Breeders’ Cup starter Champ Elysees (eighth in the 2008 Classic), Cacique (10th in the 2006 Turf), and Dansili (third in the 2000 Mile). She had a mediocre career on the track herself finishing with four wins in 17 starts overseas.

Intercontinental would finish her career with a wire-to-wire upset in the 2005 Filly & Mare Turf over favorite and defending champion Ouija Board at 15-1.

This daughter of Tricky Creek had an average career on the track, winning a minor stakes race at Hoosier Park, but otherwise running in allowance company for most of her track career. She holds the distinction of being the only dam to produce a repeat winner, Beholder, in Breeders’ Cup races. Her other winner, Mendelssohn, did manage a fifth-place finish to Accelerate in the 2018 Classic. Leslie’s Lady also holds the distinction of having a winner in three different Breeders’ Cup races (Juvenile Fillies, Distaff, and Juvenile Turf).

Beholder would get her third Breeders’ Cup victory dramatic fashion in the final race of her career, beating Songbird by a nose in the 2016 Distaff.

On the track she managed to climb the allowance ranks before her career ended at 4. Awesome Again would finish with 10 wins in 13 starts, winning his only Breeders’ Cup race as a 2-year-old in 2000.

Macho Uno was unsuccessful in two tries in the Classic (fourth in 2001 and fifth in 2002).

This minor stakes winning mare had a short career on the track. She went to post 13 times with four wins. Yet, she did produce three stakes winning progeny, two of whom were Breeders’ Cup winners.

A daughter of Storm Cat, Life Is Sweet made up a 17-1/2 length differential rallying up the center of the track during the stretch and won by 2 1/2 in her second Grade 1 victory.

The mare with the longest gap between Breeders’ Cup wins, she did clear the non-winner of one allowance conditions on the track. One of her other prolific offspring, Za Approval, finished second in the 2013 Mile to Wise Dan.

Miesque’s Approval had a long career which found her in the claiming ranks in the middle of her career only to end up back in stakes races to end her career. In 2006 he would make a big stretch move to come from behind to win by four lengths late.

While all these dams have been long since retired from breeding, it begs the question, which current dams will be able to produce multiple Breeders’ Cup winners?