For those who might be thinking this year’s version of the $600,000 Apple Blossom Handicap (G1) at Oaklawn Park is a bunch of hype because most other tracks are shut down, think again. 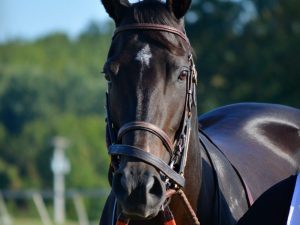 Azeri, 2002. Zenyatta, 2010. Havre de Grace, 2011. Midnight Bisou, 2019. All four champions won Oaklawn’s signature two-turn race for older fillies and mares during sensational seasons that led to Horse of the Year honors for all but Midnight Bisou, who was voted the Eclipse Award as top older female.

It should be noted that in 2010, Oaklawn racing officials had arranged a $5 million Apple Blossom showdown between 2009 Horse of the Year Rachel Alexandra and Zenyatta, a close second in the ’09 voting and on her way to capturing the year-end honor in ‘10.

The owners of both stars had agreed to the matchup that would have included other horses, but the much-anticipated clash fell apart about a month before the race after Rachel Alexandra finished second in the New Orleans Handicap and her owners pulled out.

In 2005, Oaklawn renamed its Breeders’ Cup Handicap the Azeri Stakes, the local prep for the Apple Blossom.

Serengeti Empress, Come Dancing, Ce Ce and Street Band are among the top-rated females in their division. Midnight Bisou, the top horse in the division, is not running in the Apple Blossom after her second-place finish in the $20 million Saudi Cup on Feb. 29.

In Wednesday’s post-position draw, a field of 14 was entered, with Come Dancing selected Thursday as the 3-1 morning-line favorite. The 6-year-old mare leaves from the No. 4 post and will be ridden by Florent Geroux.

Come Dancing was previously trained by New York-based Carlos Martin, but was recently moved Lukas’ barn. Geroux will be aboard for the first time.

Lukas, who knows a thing or two about top fillies and mares, calls Come Dancing “some kind of impressive filly.’’ He said she’s in great shape and he’s excited to see her run. Under Martin, Come Dancing had a record of 14-8-0-2 for $1,064,950 in earnings for Blue Devil Racing Stable.

Lukas has saddled three Apple Blossom winners, Miss Huntington in 1983, North Sider in 1987 and Azeri in 2004. One of his four Kentucky Derby victories was with the filly Winning Colors in 1988.

Ce Ce, just arrived from California, drew the far outside 14 post and will be ridden by Victor Espinoza.

After finishing fourth in the Acorn Stakes (G1) at Belmont Park last June, she missed the rest of the season with an injury but has come back in winning form. The Apple Blossom will be just the sixth race of her career.

“Her comeback race, I thought she would run well,’’ said McCarthy of her win in the January. “… I gave her every excuse out of that race to tell me she did not want to run in the Beholder and she just kept getting better and better with every work leading up to that race, so I had no hesitation of running her in that spot. She beat a very nice filly in Hard Not to Love. The way she did it, I thought was very impressive. Certainly, second race back off a layoff, to win a Grade 1, kind of tells you a lot about her.”

Not to be overlooked: Serengeti Empress

Serengeti Empress, the third choice at 4-1, comes into the race off a gate-to-wire, 6 ¼-length romp in the 1 1/16th-mile Azeri on March 14 over a sloppy, sealed track. The 4-year-old filly, who was 0-for-5 after winning the Kentucky Oaks, opened the 2020 season with a close second to Lady Apple in the Houston Ladies Classic (G3) in January.

Looking for a long shot?

Street Band has been tough to figure, but trainer Larry Jones is hoping for a bounce back win after a fourth-place finish in the Azeri in her previous start.

The 4-year-old filly, 15-1 on the morning-line, leaves from the No. 6 post under Sophie Doyle. Street Band has won five of 15 career starts with four third-place finishes and earnings of $1,222,595.

With the coronavirus pandemic shutting down racing at most tracks, the Oaklawn meet is being run without spectators. NBCSN will televise racing from 4 p.m.-8 p.m. ET; and FS1 will televise “America’s Day at the Races” from 1:30 p.m. to 7 p.m. ET. Post time for the Apple Blossom is 6:16 ET.

If you enjoyed this piece on Apple Blossom Betting Odds, check out other articles at our horse racing news section!