From soccer player and equine business student at the University of Louisville to hot walker, to assistant trainer for Todd Pletcher, Eddie Kenneally and Doug O’Neill, to private trainer for iconic Calumet Farm—what a journey it’s been.

That’s the path Englishman Jack Sisterson has taken over the years, and now he’s ready for what could be the biggest day of his nearly-one-year career as trainer for one of the world’s most famous thoroughbred stables. Sisterson will send out horses in two of the eight Grade 1 stakes on Belmont Stakes Day – Bandua in the $1 million Manhattan and Lexitonian in the $400,000 Woody Stephens.

“It’s a big day for sure,’’ said Sisterson, who is based at Keeneland and has about 40 horses in training. ‘We’re looking for forward to it.” 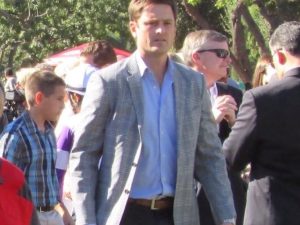 Sisterson was more or less the face of Team O’Neill in 2012 as I’ll Have Another won the Grade 1 Kentucky Derby and Grade 1 Preakness before an injury forced the colt to be scratched the day before a Triple Crown attempt in the Belmont Stakes (G1). He also was in charge of handling 2016 Derby winner Nyquist. Last July, he set out on his own, sort of, hired by Brad Kelley’s Calumet Farm – home of Triple Crown winners Whirlaway and Citation — to oversee the racing and relocate to Keeneland.

“The name Calumet itself — it’s such a historic name and it’s one that we want to build a team to grow Calumet to where it once was before,’’ said Sisterson in a Q&A with the Thoroughbred Daily News last summer.

On Aug. 12, the trainer saddled his first winner for Calumet when Next Dance broke her maiden at Belterra Park. Through June 6, Sisterson has sent out 100 starters, with 12 winners, 17 seconds and 17 thirds for earnings of $680,066.

Entering Saturday’s races at Belmont, Sisterson has high hopes for his two long shots. While the greatest interest will be on the $1.5 Belmont Stakes (G1) – War of Will goes for a Preakness-Belmont double) as well as the $1.2 million Metropolitan Handicap (G1), Sisterson will be lasered in on the Woody Stephens and the Manhattan.

He has three Grade 3 wins on his resume, including Lexitonian’s victory at 17-1 in the Chick Lang at Pimlico on Preakness Day, May 18.

In the seven-furlong Woody Stephens, Lexitonian is 15-1 on the morning-line in a field of 11.

“We try not to set the bar too high, and this is a tough race,’’ said Sisterson. “But we have confidence in him, and are expecting a big race. He ran on Derby day (fifth in an allowance race at Churchill Downs), and came back two weeks later with a big race at Pimlico. Like Derby horses, he’ll be running in three races over five weeks. He is a horse with a ton of energy.”

A 3-year-old chestnut son of 2004 champion sprinter Speightstown, Lexitonian has won 2-of-5 starts for earnings of $172,410. He will be ridden by Joel Rosario and leave from the No. 10 post.

Bandua, a 4-year-old gray/roan son of The Factor, has run on turf and dirt. He ran fourth in the New Orleans Handicap (G2) and seventh in the Westchester (G3) at Belmont in his last two starts, both on dirt, and has two wins in eight starts on turf. He worked four furlongs in 49 seconds at Keeneland on June 2.

“Dirt may not be his preferred surface, so this race comes at a good time to go back on the grass,’’ said Sisterson. “He’s run some big numbers on grass.’’

What Sisterson says he’s learned most from working with O’Neill is “if the staff is happy, the horses are happy.

“Doug always puts the horses first,’’ said Sisterson. “There’s nothing worse than dreading going to work in the morning, but that doesn’t happen with Doug. You can’t wait to get to work. We’re trying to do that here.”

Tune in on Saturday to see how the Englishman fares.