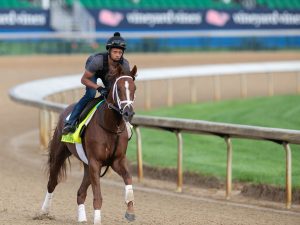 Wertheimer and Frere’s homebred Spinoff is one of trainer Todd Pletcher’s two Belmont runners and makes his first start since finishing 18th of 19 in the Kentucky Derby five weeks ago. He is a son on of grade 1 winner Hard Spun, who was fourth in the 2007 Belmont Stakes, and the grade 1-winning Gone West mare Zaftig, so the 12 furlongs of the Belmont falls well within his range of probable ability.

Before the Derby, Spinoff had won an allowance race at Tampa and then was second in the Louisiana Derby, so an argument can be made about his fitness for the Derby, but now that he has the 10-furlong Derby under his belt and a series of strong works in New York, including the last two over Belmont’s main track. Hall of Fame jockey Javier Castellano rides for the first time and will break from the number six hole in the starting gate.

Spinoff was given morning line odds of 15-1.