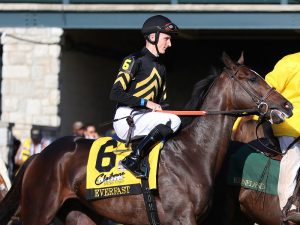 Trainer Dale Romans will send out Calumet Farm’s Everfast for a Belmont Stakes start, hoping to capitalize on the colt’s nice runner-up finish at nearly 30-1 in the Preakness Stakes last out. The son of Take Charge Indy seems to be hit and miss when it comes to black-type company, having only managed two seconds in eight previous stakes starts, but his Preakness performance was enough to send him to New York.

Romans has saddled nine in the Belmont previously with four thirds and is hopeful this one will be his first winner. Jockey Luis Saez has been aboard two previous Belmont Stakes runners, but has yet to win one. The new Calumet Farm’s regime has sent out two Belmont starters and Preakness Stakes winner Oxbow’s second was the best finish of the two.

Everfast has had two workouts at his home base of Churchill Downs since the Preakness, including five furlongs in 1:01 on Monday, and was shipped into Belmont Park on Tuesday,