In the days leading up to the $3 million Pegasus World Cup Invitational (G1) at Gulfstream Park in Hallandale Beach, Florida, usracing.com will profile the horses in the race set for Jan. 23. The profiles will be updated on Jan. 20 with morning-line odds, post positions and jockeys. 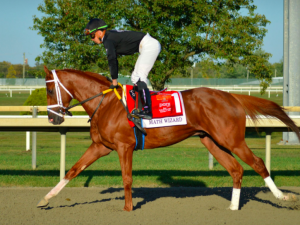 He has a Grade 1 win on his sheet, but that was notched many moons, and many races, ago when he pulled off a huge upset in the Pennsylvania Derby in September 2019.

Not only is that his only G1 score, it’s the only time he’s visited the winner’s circle in seven tries since. Last time out he didn’t show much in the Harlan’s Holiday (G3) at Gulfstream Park on Dec. 12, managing only a mild rally from the back of the pack. On the bright side, his lone G1 win was at the Pegasus distance of 1 1/8 miles and Gulfstream is his home track.

Problem: This seems like an ambitious spot for the now 5-year-old horse to try to recapture the form he showed on his best day in the Pennsylvania Derby. He wasn’t among the original invitees and only moved up off the also-eligible list with the retirement of defending Pegasus champion Mucho Gusto and multiple Grade 1 skipping the race.

Notes: Worked 3 furlongs in 37.11 seconds on Jan. 17 at Gulfstream … Saffie Joseph, Jr., the youngest trainer to win the Triple Crown in his native Barbados, is up-and-coming in the game and he has before worked magic with this horse he claimed for $25,000 in 2019. He keeps knocking on the door with his ever-expanding barn … Majority owner John Fanelli is a former professional poker player from South Philadelphia who started going to the races with his dad when he was 7 … Before the Pennsylvania Derby, he had already sold minor shares to Collarmele Vitelli Stables, Bassett Stables, Ionas Zoumas, and his trainer. “They all are small-time owners who just started with Saffie, bought a little share and took a chance. They’re ecstatic they did,” he said. “Then I sold a piece to Cash is King (Chuck Zacney) and LC Racing (Glenn Bennett). They each bought a small piece …The Cash is King syndicate, part of the ownership group, is no stranger to the big stage. The partnership owned 2005 Preakness and Belmont winner Afleet Alex and 2016 Kentucky Oaks winner Cathryn Sophia … Khalid Mishref is a Saudi Arabian national.