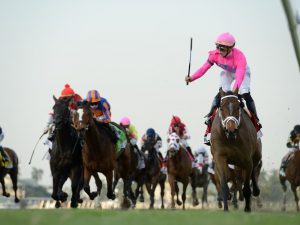 The $1 million Pegasus World Cup Turf (G1) was conceived by thinking global. Yet to find the winner, the key was to think local.

Tyler Gaffalione, born in Davie, Florida, only 15 miles from Gulfstream Park, took the short way around the track Saturday to pull off an upset on 11-1 shot Zulu Alpha. After breaking from the rail, Gaffalione never left it, and he ran down pacesetter Magic Wand in mid-stretch before drawing away to a two-length win. Instilled Regard’s rally fell a neck short of Magic Wand.

“The horse broke well and the speed set up in front of us,” said Gaffalione, who waved his whip triumphantly as the 7-year-old gelding hit the wire. “I was able to let him settle. They just kept opening up and I didn’t see any reason to go around them. So we just stayed on the fence, and he honestly got more competitive down in there. He really exploded and finished the job.”

“When he shot up the rail, I stood and screamed my lungs out,” said Hui. “It’s just an unbelievable feeling. I never thought I would win a Grade 1.”

Irish shipper Magic Wand has made a lucrative career out of finishing second. She also was the runner-up in last year’s World Cup Turf behind eventual Horse of the Year Bricks and Mortar. This time she tired in the final furlong after doing all the work up front. English champion Ryan Moore gunned her to the lead from the outside post in the field of 12, and Magic Wand stayed there despite being hounded until the stretch by 29-1 long shot Henley’s Joy. Magic Wand looked like a winner until Zulu Alpha burst through late.

It was the 14th time the eternal bridesmaid was second in a 23-race career, and she’s 1-for-18 in Grade 1 and Group 1 events. The globetrotting 5-year-old has run in seven countries on four continents, and she’s earned megabucks in Europe, Asia, the United States and Australia. Despite going 1-for-12 last year for Irish wizard Aidan O’Brien, she earned more than $3.9 million. Seconditis isn’t necessarily a bad thing.

The $200,000 she picked up Saturday raised her career total to $4,346,240 for Michael Tabor, Derrick Smith and Mrs. John Magnier. Not bad for a string of consolation prizes.

“Look, she ran super,” Moore said. “She’s an uncomplicated filly and it’s a shame she got beat. But she ran lovely.”

“Just a great horse,” trainer Mike Maker said. “I thought he got unlucky in the Breeders’ Cup or he might have gotten a bigger slice there. He got some time off after that and he really thrived coming into this. Since he’s been back, he’s been a lot sharper.

“For a million dollars you have to take a shot, and it paid off. I was just hoping that Tyler would get out. But he saved all the ground and he got lucky.”

Gaffalione, 25, has become an excellent rider on grass, where timing and tactics are crucial. Last year, however, he spoke of having problems when he started riding on turf.

“My first 100 or so grass races, it was tough, and it felt like I won two or three,” he said. “It really bothered me, so I sat down and watched replays and learned what to do and not to do.”

He got it all figured out.