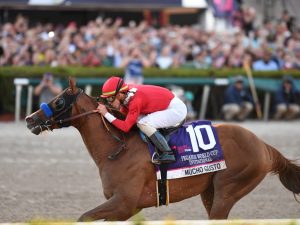 Mucho Gusto barreled three wide around the turn to take command and rolled to an easy 4 1/2-length victory in the $3 million Pegasus World Cup (G1) at Gulfstream Park on Saturday.

With Eclipse Award-winning jockey Irad Ortiz, Jr. aboard for the first time, the 4-year-old son of Mucho Macho Man was taken back after the break and tucked in behind Bodexpress and Mr Freeze, who led most of the race.

When the 10-horse field rounded the turn, Ortiz began asking the Bob Baffert-trained colt for more run and he was in full stride at the quarter pole to blow past the leaders and leave the rest of the field in the dust.

Mucho Gusto, making his first start since finishing fourth in the Oklahoma Derby (G3) back on Sept. 29, is now 6-2-2 from 11 lifetime starts for owner Prince Faisal Bin Khaled.

With his first Grade 1 victory, Mucho Gusto is set to run next in the inaugural $30 million Saudi Cup on Feb. 29.

Sent off as the 3-1 second choice behind 5-2 favorite Higher Power following Thursday’s scratches of the two morning-line favorites, Omaha Beach and Spun to Run, Mucho Gusto gave Hall of Famer Baffert his second win in four World Cups. Baffert, watching from home in California, sent out Arrogate to win the first World Cup in 2017.

For Ortiz, the win made him and his agent look like a geniuses. In a surprise move, Ortiz took off Breeders’ Cup Dirt Mile (G1) winner Spun to Run to take the mount aboard Mucho Gusto.

“I was going very good the whole race,’’ said Ortiz. “When I asked him, he took off at the quarter pole.”

Baffert’s assistant Jimmy Barnes was in the winner’s circle, and said he was confident Much Gusto would run a big race.

“Absolutely,’’ he said when asked if he expected such an easy victory. “This is a fresh horse and he’s been training outstanding so we were expecting a big performance today.” 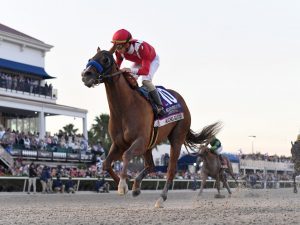 Mucho Gusto, on the 2019 Triple Crown trail after winning two of three starts in 2018, won the Robert Lewis (G3), ran third in the Sunland Derby (G3) and did not run in any of the Triple Crown races.

In the $1 million Pegasus World Cup Turf (G1) run earlier on the card, it was 7-year-old Zulu Alpha ($25.60) getting a sweet rail ride from Tyler Gaffalione, and passing Magic Wand in the stretch for a two-length victory.

“The horse broke well and the speed set up in front of us. I was able to let my horse settle,’’ said Gaffalione. “They just kept opening up and I didn’t see any reason to go around them so we just stayed on the fence, and he really exploded down in there and finished the job. He honestly got more competitive down in there.”

Ryan Moore, aboard Magic Wand for trainer Aidan O’Brien, was proud of the 5-year-old mare.

“Look, she ran super,’’ he said. “She’s an uncomplicated filly and it’s a shame she got beat. But, she ran lovely.”