Use Dragonfly Eyes To Win At The Track 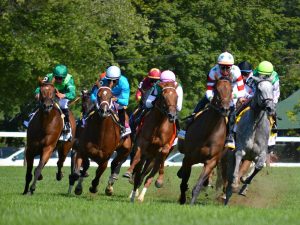 When you think of animals that have great eyesight what comes to mind?

Eagles can see eight times as far as humans and can scope out a small animal on the ground from two miles away. Owls have a 270-degree range of vision by moving their heads around and some of the best night vision in the animal kingdom. Our good friend Rail Guy has been known to spot live longshots in the stables from the grandstand apron at Monmouth Park, or so he claims.

While having great night vision or being able to spot a small furry animal from two miles away may be helpful to birds, they aren’t going to help you at the track. If you want to win, you need to be more like an insect. You need to see the races like a dragonfly.

Besides eating many times their weight in mosquitoes every day, dragonflies run, or fly, laps around us when it comes to vision. The human eye has only one lens. Dragonflies, on the other hand, have compound eyes that are composed of 30,000 facets that each have their own lens and can see ultraviolet and polarized light, which we can’t see.

How can seeing things through multiple lenses help you at the track?

Look at races in different ways

Our friend Rail Guy likes to look at every race on the card. He looks at each one the exact same way. He loves Beyer Speed Figures so much I was going to start calling him Andy one sunny August afternoon at Monmouth Park. While he may consider different factors in a race, his picks are dominated by the Beyer Speed Figures. Some days he wins, but most days he is left scratching his balding head wondering what went wrong with his handicapping.

Does every race figure the same way? Is there one figure or approach that works for every type of race and surface?

There are race types where you may rely more heavily on speed and others where pace or class may be more important. When you assess a field of first time starters you are looking harder at the pedigree and connections of the horse than you do for a field of older $5,000 claimers. While you should look at all aspects of every race, you know that you can’t weigh them all equally on every race based on distance, class, age, and surface of the race.

All that analysis can also get thrown right out the window when you also incorporate a physical inspection of the horses in the paddock. You may love a certain horse on paper, but when you see him gimping through the paddock throwing his head around, you know he isn’t there to run the race of his lifetime.

See how your handicapping may fail

Our good friend Rail Guy loves to tell everyone why his horse is going to win. “Da five hoss is gonna take dis field all da way on front, he can’t lose.”

Rail Guy doesn’t like when someone disagrees and suggests that there is too much early speed in the race and that his horse may be the victim of a hotly contested pace early, duel, and tire. “Not possible I tell ya, no way in heck dat four hangs with da five.”

When you see the results of the race a few minutes later Rail Guy is again scratching his balding head. He is still in a daze. He can’t fathom how that four pressed the pace so fast that the five had nothing in the tank by the top of the stretch. Once he has his wits back he’ll be quick to blame the jockey for a bad ride or the starter for opening the gate too early. He’ll have a million excuses instead of realizing that he needed to consider how his horse could fail before the race to better craft a ticket that may win.

If you challenge yourself on what happens if the race doesn’t go the way you planned and how your contenders may react to the change in plans, you can see the many “what-ifs” that exist in a race. Some are more likely than others and in many cases your contenders can still figure on benefiting positively from a different race scenario developing. In other cases, you may need to consider alternate contenders depending on how you think your handicapping may fail.

No one wants to be heading into the last leg of a Pick 6 without having fully vetted their contenders for a “what-if” scenario that could change the projected outcome of the race, right?

What–ifs, poke holes in your own theories; lose the bias you may have.

Observe what caused your picks to fail

After every race Rail Guy is full of excuses why his horse didn’t win. “Dam bug boy couldn’t ride a carousel hoss wit out fallin’ off… dats why I lost dis one.”

Was it the fault of only the apprentice jockey riding the horse today? Probably not.

Was it that his horse was steadied at the start and then clipped heels in the first turn? Perhaps the horse wasn’t looking right in the paddock. Maybe he was a little gimpy or seemed too angry to run today. Could a horse that looked like nothing on paper showed an unusually fast blazing pace for the first half mile before quitting and burning out your horse in the process? Did you overlook something in his past performances that would have suggested this effort? Did your horse hate the slop today?

Is there ever only one possible reason that you lost the race? It is more than likely a multitude of reasons. If you look at the race with dragonfly eyes you will see the real reasons you lost and be able to adapt your handicapping for the next time you see a similar situation.

The next time you sit down to handicap a race card, try to be a dragonfly unlike our friend Rail Guy. While he may eat several times his weight in hot dogs at the track he doesn’t see the races the same what that those who make their living playing the races do. Learn to look at the races, both before and after, through different lenses and you will be a better and more profitable handicapper.