Del Mar’s Turf Festival closes out the track’s fall meeting over this holiday weekend, ending a successful run that began with the 36th Breeders’ Cup in early November.

Starting Friday, Del Mar features six graded stakes on the turf, including a pair of Grade 1s – the Hollywood Derby on Saturday and the Matriarch Stakes on Sunday. 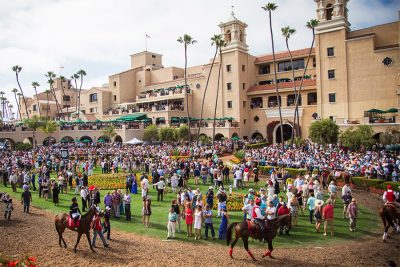 The other turf stakes at Del Mar are the Hollywood Turf Cup (G2) on Friday, the Seabiscuit Handicap (G2) and the Jimmy Durante Stakes (G3) on Saturday, and the Cecil B. DeMille Stakes (G3) on Sunday.

Trainer Chad Brown sent an eight-horse contingent from New York to California and has a bunch of big chances to add to his West Coast victory total.

Brown, already a three-time winner of the Hollywood Derby, sends out Public Sector and Sifting Sands in the ninth running of the 1 1/8-mile event.

In the 1 ½-mile Turf Cup, Brown sends out 8-5 favorite Rockemperor, who ran eighth in the BC Turf on Nov. 6. He won the Grade 1 Joe Hirsch Turf Classic prior to the BC Turf and has raced mostly in New York.

Brown is looking for his first win in the Seabiscuit and entered Sacred Life (second by a neck in this one in 2019) and Flop Shot.

In the past seven seasons of the Turf Festival at Del Mar, Brown has a win in the Red Carpet, the Jimmy Durante, and the Cecil B. DeMille, and three wins in both the Hollywood Derby and the Matriarch.

Del Mar isn’t the only track with a large menu of stakes:

Perhaps the main event is at Churchill Downs, when Maxfield closes out his career against the likes of Midnight Bourbon, Dr Post and Happy Saver in the Clark Stakes on Friday. On Saturday, Tiz the Bomb tops the field in the Kentucky Jockey Club Stakes (G2), with Derby-qualifying points on the line.

TVG will televise races from around the country, including Del Mar.

A disappointing eighth in the BC Turf at Del Mar earlier in the month, trainer Chad Brown’s Rockemperor is the 8-5 favorite in a field of seven. Also entered are 3-1 Friar’s Road and 4-1 choices Acclimate and Say the Word.

Rockemperor will be ridden by Flavien Prat leaving from post seven. The 5-year-old Ireland bred has a career record of 21-4-5-6 for earnings of $954,404. 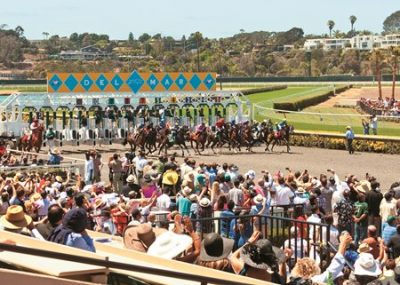 Sacred Life (8-5), a close second to Next Shares in this one in 2019, is back for another try for trainer Chad Brown. The 6-year-old bred in France will be ridden by Jose Ortiz from the far outside post 7. Flop Shot, also trained by Brown, is the 4-1 third choice. Field Pass, trained by Mike Maker, is 5-2. Sacred Life won the Grade 3 Knickerbocker at Belmont on Oct. 10 in his last start.

California-based Helens Well is the slight 7-2 favorite in a field of 11, which includes the usual slew of East Coast invaders, who have won the previous seven runnings of this race. Umberto Rispoli has the call leaving from post 7 as Helens Well comes into the race off an eighth-place finish in the BC Juvenile Fillies Turf (G1).

A full field of 14 is expected with trainer Chad Brown’s Public Sector the 5-2 favorite over the likes of Subconscious at 4-1 and Camp Hope at 5-1. Brown also saddles 15-1 longshot Sifting Sands as he seeks a fourth win the ninth running of this race.

Verbal represents trainer Chad Brown in this one, The colt won by four lengths in his debut at Belmont on Oct. 10. A field of 11 was entered.

The 5-year-old Viadera returns for trainer Chad Brown seeking to win this race for the second year in a row. Brown also sends out Regal Glory in the field of six.

Viadera was sixth in the First Lady Stakes (G1) at Keeneland last month, but previously won the Ballston Spa Stakes (G2) at Saratoga on Aug. 28. She has a record of 16-7-1-1 and will be ridden by Flavien Prat.

Crazy Beautiful could be the one to beat as the Ken McPeek-trainee comes into the race off a runner-up finish in the Rubicon Valley View Stakes (G3) at Keeneland on Oct. 29. She was beaten a length last out by 25-1 longshot Navratilova.

Others entered include Played Hard and Shalimar Gardens.

Christophe Clement sends out three of the eight contenders, including last year’s winner Mutamakina, the 3-1 favorite. His other runners are La Dragontea (7-2) and Sorrel (9-2).

A field of eight was entered, with Chateau carrying a co-highweight of 131 pounds in the 108th edition of this race. While the 6-year-old gelding ran seventh in a Parx allowance last time out for trainer Rob Atras, he excels at the Big A with a record of 10-5-2-2. 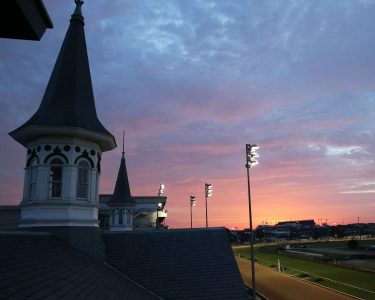 Some of the top horses from 2021 are in the field of eight, including 6-5 favorite Maxfield in the final race of his career, and 8-5 second choice Midnight Bourbon.

Also entered are a pair of Todd Pletcher-trainees, Happy Saver and Dr Post, as well as King Fury and Night Ops.

Maxfield has won seven of 10 career starts, with a second and a third for trainer Brendan Walsh. Winner of the Stephen Foster (G2) at Churchill in June, the 4-year-old colt ran second in his last two starts the Whitney (G1) at Saratoga and the Woodward (G1) at Belmont.

Midnight Bourbon, sixth in the Kentucky Derby (G1) and second in the Preakness (G1), was second in his previous two starts, the Travers (G1) and the Pennsylvania Derby (G1) for trainer Steve Asmussen.

Sandstone is the 8-5 favorite in a field of eight, which also includes 2-1 choice Famed and 3-1 choice Yuugiri.

Trained by Ken McPeek, Sandstone is 2-for-3 with a win in the Rags to Riches Stakes at Churchill on Oct. 31. Famed, trained by Brad Cox for Godolphin, is 2-1-1-0.

The race is a Kentucky Oaks (G1) points qualifiers, with points of 10-4-2-1 awarded to the first four finishers.

A Derby-points qualifiers (10-4-2-1 to the first four finishers), a full field of 14 was entered. Trainer Ken McPeek’s Tiz the Bomb is the 3-1 favorite over the likes of 7-2 choice Howling Time and Classic Causeway.

Tiz the Bomb is a well-seasoned colt with three wins in five starts in 2021. He finished second by a head to Modern Games in the controversial Breeders’ Cup Juvenile Turf (G1).