The Lineup: 6 Breeders’ Cup “Win and You’re In” Races at Belmont, Churchill, Woodbine

Six, count ‘em. Two at Churchill Downs. One at Belmont Park. And three at Woodbine Racetrack.

The final push to the 38th Breeders’ Cup – now seven weeks away on Nov. 5-6 at Del Mar – begins this weekend with a half-dozen, all-fees paid berths into BC races, plus the official start on the road to the 2022 Kentucky Derby (G1) and Kentucky Oaks (G1).

On the first Saturday of the Belmont fall meet, there’s a trio of intriguing stakes races headed up by the $1 million Jockey Club Derby Invitational with a “Win and You’re In’’ spot in the BC Distaff awaiting the winner.

Churchill Downs has a total of five stakes races on Saturday night (first post is 6 p.m. ET). In addition to the 2-year-old stakes, there’s the Locust Grove (G3) featuring multiple Grade 1 winner Shedaresthedevil in a final prep before the BC Distaff.

Fox Network’s FS2 will have live coverage from Belmont from 1-7 p.m. on Saturday; on Sunday, it’s FS2 from 1-2 p.m. with FS2 taking over from 2-6 p.m. TVG covers live racing from tracks around the country as well as Woodbine. NBCSN continues its Breeders’ Cup Challenge Series with live broadcasts from Woodbine on Saturday beginning at 5:30 p.m., and Sunday, beginning at 4:30 p.m.

And away we go (all times are ET):

Lone Rock is the 1-2 favorite in a field of six as the 6-year-old gelding comes into this one on a four-race win streak, and victories in seven of his last eight starts for trainer Robertino Diodoro. He won the Grade 2 Brooklyn in June at Belmont and the Birdstone Stakes in August at Saratoga. 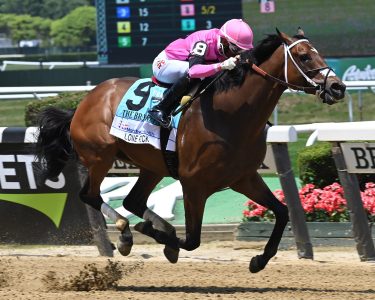 Among the other top contenders are Moretti, trained by Hall of Famer Todd Pletcher, at 5-2 and Empty Tomb at 6-1.

Higher Truth, trained by Chad Brown, is the 3-1 favorite in field of seven that includes a European contingent led by Creative Flair and Harajuku. Brown also entered Shantisara (7-2).

Creative Flair, trained Charlie Appleby, ran third in the Grade 3 Saratoga Oaks Invitational in her North American debut. The filly is a three-time winner in England.

Harajuku, trained by Andre Fabre won the Grade 3 Cleopatre at Saint-Cloud in May and comes into this race off a fourth-place finish in the Group Prix de la Nonette last month at Deauville.

Higher Truth is the only filly to compete in all three of the legs of the Turf Triple series for fillies. She was third in the Belmont Oaks and second in the Saratoga Oaks.

Belmont Derby (G1) winner Bolshoi Ballet, trained by Aidan O’Brien, returns as the co-second choice at 5-2 behind favorite Yibir at 2-1.

The Euros may show the way in this “Win and You’re In’’ race for the BC Turf (G1). Yibir is trained by Charlie Appleby, who doesn’t send horses to America unless he feels like a winning race is at hand.

The race is the final one in the Turf Triple for males: Bolshoi Ballet won the Belmont Derby and State of Rest won the Saratoga Derby.

Bolshoi Ballet was a steward’s scratch from the Group 2 Prix Niel on Sept. 12 at Longchamp due to an irregularity with the vaccination record in his passport and subsequently redirected to New York.

A field of 11 fillies are entered in this “Win and You’re In’’ race to the Breeders’ Cup as well as the first qualifying-points earner to the 2022 Kentucky Oaks.

Ontheonesandtwos, trained by Norm Casse, is the 5-2 favorite with a record of 3-1-1-0. The filly won in her debut at Churchill Downs by 1 ¾ lengths in May, then finished second in the Debutante and sixth in the Adirondack Stakes (G2) at Saratoga. Jockey Ricardo Santana Jr. will ride from post No. 4. 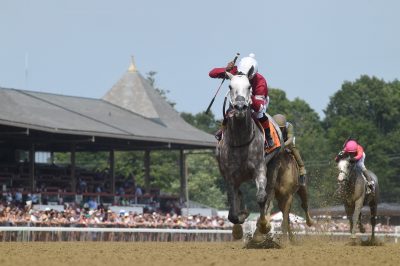 Stellar Tap romped by 5 ¼ lengths in his debut going 7 furlongs on Aug. 7 at Saratoga. Guntown broke his maiden at second asking at Ellis Park.

Major General is 4-1 for Todd Pletcher. He won in his career debut at Saratoga.

In her final prep before the BC Distaff (G1), Brad Cox-trained Shedaresthedevil takes on six challengers as the 4-5 favorite. The 2020 Kentucky Oaks winner is 3-for-4 in 2021, including her most recent win the Clement L. Hirsch (G1) at Del Mar on Aug. 1 – the same track she’ll run on in the Breeders’ Cup.

Envoutante, trained by Ken McPeek, is the 2-1 second choice. 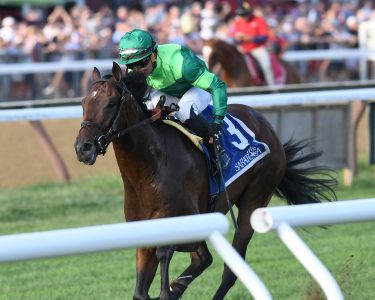 Hall of Famer Mark Casse sends out three of the 10 entries in this “WAYI’’ event for the BC Mile (G1).

March to the Arch (8-1), Olympic Runner (10-1) and Ride a Comet (5-1) will line up for the race, but the one to beat is Chad Brown-trained Raging Bull as the 2-1 top choice. The 6-year-old horse ran a disappointing sixth in the Fourstardave (G1) at Saratoga but won the Maker’s Mark Mile (G1) earlier in the year and is looking for a fourth career Grade 1 win.

And to the surprise of hardly anyone Mark Casse has four of the 10 entries in this “WAYI” race for the BC Jchurchiuvenile Fillies (G1).

Pizza Bianca, trained by Christophe Clement, is the 4-1 second choice.

Diabolic is 3-for-3, her most recent win coming in the Catch A Glimpse Stakes at Woodbine on Aug. 21.

Albahr, a winner in 3-of-4 in England, is the 7-5 favorite in a field of nine vying for an all-fees paid berth to the Breeders’ Cup in this “WAYI’’ race.

Trained by Charlie Appleby, the chestnut gelding owned by Godolphin, ran third in his career debut and has reeled off three wins in a row.