Medina Spirit was set to come east Saturday to headline the $1 million Pennsylvania Derby (G1) at Parx Racing. He would have arrived with a whole lot of off-track baggage. 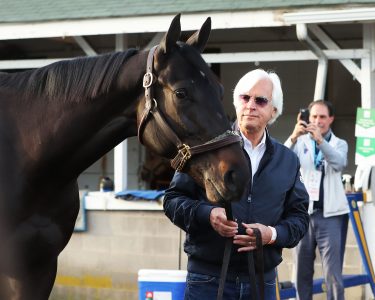 Let’s not blame the colt for all the off-track craziness. He’s as honest as they come. Many in racing won’t say the same for Baffert.

We are still awaiting adjudication of the Kentucky Derby (G1) that saw a victory by Medina Spirit cast in doubt by a post-race medication positive.

The Pennsylvania Derby, a prep for the Breeders’ Cup Classic (G1) on Nov. 6, will now feature Hot Rod Charlie, looking for redemption following his disqualification in the Haskell (G1) for interfering with Midnight Bourbon, who is also in the field.

Also ongoing is a review by the Breeders’ Cup to determine Baffert’s 2021 eligibility based on a series of medication violations.

While Baffert’s regulatory woes continue to mount, Medina Spirit goes about his business in good order. He won the Shared Belief Stakes at Del Mar in his first start since a third-place finish in the Preakness (G1).

“I want to do what is best for the horse,” Baffert told the Parx Racing publicity office. “I don’t like the way he drew.”

Also in the field are Weyburn, Keepmeinmind, Bourbonic, Speaker’s Corner, I Am Redeemed and Americanrevolution.

The Pennsylvania Derby returns after a one-year hiatus due to the coronavirus pandemic. It tops a card that includes the $1 million Cotillion (G1) for 3-year-old fillies and the Gallant Bob Stakes (G3).

One of the oldest jokes at Monmouth Park goes like this: if they ever drained the infield lake, they’d uncover enough battery power to keep Oceanport, New Jersey lit for a month.

An exaggeration, of course, that does contain a kernel of truth. 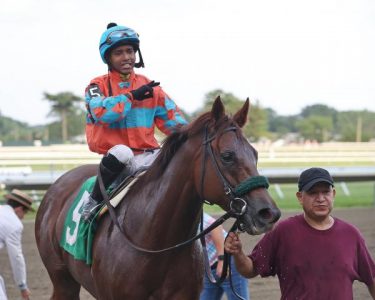 For generations, unscrupulous jockeys cheated by using a battery device, also known as a buzzer, to shock horses into running faster … not only at Monmouth but at every racetrack across the land.

The key to getting away with the crime was discarding the evidence. Hence, the long-range toss into the lake on the gallop out.

Apparently, Tomas Mejia never read that section of the cheater’s manual. He reportedly still had the device in hand in the winner’s circle, a transgression apparently caught on a photograph now in the steward’s possession.

Stupid is as stupid does, so Meija finds himself suspended for 10 years. Good riddance. You won’t be missed.

The sport is going through a period of intense soul searching, trying to root out cheating at all levels. Even the high and mighty are under the microscope. Exhibit A: Bob Baffert.

Tolerance for shenanigans is low. That’s good news. A possible 10-year ban might be sufficient deterrent the next time a jockey is tempted to “plug in” a mount.

If it’s the fourth Thursday in September, it must be Little Brown Jug Day, one of the great traditions in harness racing.

Fans will be back. Attendance was limited last year because of the pandemic. This year the gates will be wide open with the traditional turnout of over 40,000 expected at the Delaware County Fairgrounds, just north of Columbus, Ohio, for one of the defining races of the 3-year-old pacing schedule. It’s a great throwback event, a reminder of standardbred racing’s rural roots firmly planted in country soil.

It is the 75th anniversary of the Jug, the final event of the weeklong Grand Circuit stop contested over the storied half-mile track.

One of the more interesting contenders is American Courage, supplemented to the race for $45,000. It could be a worthwhile gambit. American Courage is a half-mile specialist with a record of 9-for-11 over four-turn ovals.

He has been a force in the New York Sires Stakes with most of those races contested on half-milers. This will be his chance to make a major statement against the cream of this year’s sophomore pacing crop.

American Courage already owns a victory in the Messenger Stakes at Yonkers. A Jug win would give him two thirds of the Pacing Triple Crown.

Jug Day will be a fun afternoon for racing fans, especially if you appreciate old-school heat racing. It’s an even better experience in person. Jug Day is the centerpiece of a large-scale county fair with all the usual trappings of amusement rides, food stands, and livestock displays and competitions.

If you are in the area, it’s worth a visit. And don’t forget the Kettle Korn!